In this section we look at another type of analytical technique; Spectroscopy. Spectroscopy involves the interaction between matter and electromagnetic radiation. There are different kinds of radiation that include visible light, ultraviolet light, infrared, etc., and the type of radiation used determines the type of spectroscopy used as well as what kind of sample can be examined through the technique.

Note that features of instrumentation and operation are not part of the VCE study design but are still important to understand the basic principles of each spectroscopic technique.

AAS is a relatively sensitive form of spectroscopy when compared to a simple flame test procedure. It is used to determine the amount of a given substance and is capable of detecting over 70 elements. It involves a cathode lamp that emits light of wavelength required to excite the electrons in the sample. The flame is used to vaporise the sample to create an atomic vapour. This step is essential for turning solid samples into gaseous molecules. The monochromator is also used to select the wavelength of light absorbed by the sample to be exposed to the detector and recorder which measures the absorbance of the sample. The amount of substance will determine how much light is absorbed and ultimately how much light is received by the detector.

Shells, also known as energy levels, are regions surrounding the nucleus of an atom which electrons inhibit. Electrons that are within shells that are closer to the nucleus experience stronger attraction to the nucleus compared to electrons in further away shells and are thus in lower energy levels. Electrons jump to different shells once excited by radiation and as the electron ‘relaxes’ back down, the electron emits the energy that has been absorbed in the form of light. The emitted energy can be used to work out the difference in energy between shells. The only types of radiation involved in spectroscopy that is capable of electron transitions is UV and visible light radiation. Infrared and radio waves do not have the capacity to promote electrons to higher energy levels. 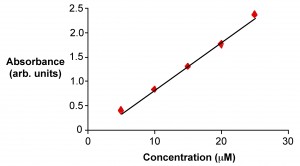 Diagram showing an example of a calibration graph.1

Utilises light from the electromagnetic spectrum that has sufficient energy to be capable of promoting electrons to higher energy states. It is capable of detecting a wider range of elements compared to AAS as it uses not only visible light but also UV. The principles of electron transitions and the use of calibration graphs also apply to UV-visible spectroscopy.

The monochromators is an important instrument in this procedure. It is responsible for selecting the wavelength of light that is most strongly absorbed by the sample in solution. For example, if the sample solution was CuSO4, it will exhibit a blue colour. The blue colour that we see in our eyes is due to CuSO4 absorbing all other wavelengths of light other than blue which is reflected off CuSO4; hence the blue appearance. The complementary colour, colour which is on the opposite end of the colour wheel, to blue is yellow-orange and is thus the colour/wavelength of light that CuSO4 can most strongly absorb; hence it is also the colour that is selected for  by the monochromators. The light detector and recorder and then responsible for detecting the absorbance of the sample which is then used by comparing the absorbance of other standard solutions to find the samples unknown concentration.

Infrared has longer wavelength and is lower in energy than visible and UV light. Hence, infrared does not have enough energy to promote electrons to higher energy states. Instead, absorption of infrared radiation causes molecules to move to higher vibrational energy levels.

The main purpose of IR is to detect what type of functional groups are present within an unknown molecule.

NMR unlike the other forms of spectroscopy utilises radio waves that change and affect the spin of neutrons and protons. Atoms with an odd number of nucleons (protons + neutrons) have an overall spin. Therefore NRM can theoretically be used to study any nuclei with an odd number of nucleons however they need to be present in a reasonable abundance. Hence, the most common types of NMR used are proton NMR and 13C NMR.

A reference molecule such as Tetramethylsilane (TMS) is used to standardise measurements across different NMR machines. TMS is used because it is inert and won’t react with the sample and produces a small single absorption peak away from signals produced from other compounds.

Signals can also be described as being downfield or upfield relative to one another; downfield referring to signals towards the left of the spectrum and upfield referring to those on the right. ‘Deshielding’ occurs when there is a reduction of electron density around the hydrogen/carbon atom being examined due to electronegative atoms such as oxygen. This in turn affects the amount of energy needed for the nucleus to change spin states. Deshielded results in signals appearing downfield on the spectrum.

NMR is mainly used to determine the identity and structure of compounds. It tells us four main points about an element:

A mass spectrometer measures the mass-to-charge ratio of ions. Samples in this procedure are introduced as gases. There are two main principles when it comes to mass spectroscopy:

Involves bombarding the molecule with an electron. I.e.

Isotopes are defined as elements that share the same number of protons but a different number of neutrons and thus atomic mass. Examples include carbon-12carbon-13 and chlorine35/chlorine37. It is important to be aware that isotopes exists and they will be reflected as separate peaks that are relatively close together.

An example of a mass spectrum of dodecane. (The highest peak of the mass spectrum is referred to as the base peak and has a relative intensity of 100%.)2