As scientists, an essential skill to have is accurately naming molecules to convey the correct information. The International Union of Pure and Applied Chemistry (IUPAC) have developed a naming system for molecules which is also used in VCE chemistry.

Similar to the molecular formula as it states how many of each atom are present in the molecule however, each group of atoms are placed sequentially one after another to represent their positions in the actual molecule.

Quite literally, a drawing to represent the molecule. Bonds are drawn in between atoms.

-ane (e.g. methane) molecules are based on alkanes, so the molecule will only have single carbon-to-carbon bonds

-ene (e.g. propene) molecules are based on alkenes, so the molecule will have one or more double carbon-to-carbon bonds

When naming alkenes, a number should be added to indicate the location of the carbon-to-carbon double bond. This number can occur either before or within the molecule name, such that both 2-butene and but-2-ene are acceptable.

The prefix before the base of the word indicates how many carbons make up the longest carbon chain, as in the following table:

When numbering the position of a functional group, work out which carbon the functional group is bonded to. Carbons should be counted along the longest continuous carbon chain, as in the following examples:

When numbering functional groups, make sure to count the least number of carbons possible. Because of this the following molecules are both called 3-heptanol, rather than 3-heptanol and 5-heptanol.

When naming a molecule with multiple functional groups, ensure

Multiple of the same functional group

When naming a molecule that has two of the same functional group, group the carbon numbers together at the start of the name and add “di-” before the name of the functional group. For example, the following molecule is 1,1-dichloroethane: 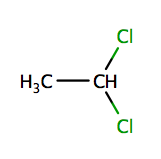 While the following molecule is 1,2-dichloroethane: 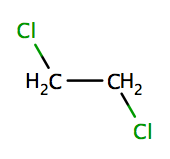