Collision theory explains the theory behind how reactions occur at a molecular level. For a molecule to react, they must meet certain criteria that are listed below.

Factors that affect the rate of reactions are listed below.

Diagram showing the affect temperature has on the amount of particles with sufficient energy to react.1

High temperature can be also thought of as higher energy. An increase in temperature means that more particles will have sufficient energy to break the activation barrier and thus increasing temperature increases the chance of successful collisions. 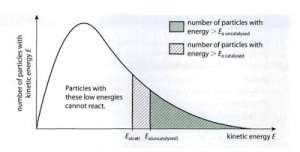 Diagram showing how activation energy is lowered and thus more particles have sufficient energy to react in the presence of a catalyst.2

By lowering the activation energy, the number of molecules with sufficient energy to overcome the activation barrier increases and thus the chance of successful collisions also increases. Add pic

There are two main types of catalysts: