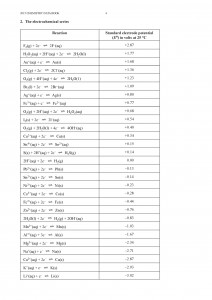 Electrochemical Series given in VCE data booklet. Click to enlarge1

Overall equations from redox half equations

To deduce the overall balanced equation of a redox reaction from the electrochemical series, you must ensure that both half equations being used has the same number of electrons. If not, multiply each to reach their lowest common multiple. Once multiplication has been applied, add the two half equations together and cancel out any reactants/products such as electrons. Electrons should never be in the overall balanced equation.

If the two half equations of a reaction were:

The overall equation would be:

(Note how the half equation involving Na has been multiplied by two so that electrons in both equations would be able to cancel each other out).

The potential difference of a cell measures the amount of energy that flows between two half-cells.

The electrochemical series also has the limitation of not being able to tell us the rate of reaction of half equations. Just because a reaction is predicted to occur before another does not mean it will react at all. The reaction of hydrogen peroxide with itself can be predicted to be a viable reaction as it appears as an oxidant and also a reductant at a lower position in the electrochemical series. However, the rate of its reaction is so slow that no reaction is observed unless a catalyst is used in conjunction.