Transition matrices are used to describe the way in which transitions are made between two states. It is used when events are more or less likely depending on the previous events.

This is best described in an example.

The transition matrix in this case would be:

where n = one state, and n+1 represents the next state.

Notice that the column adds up to 1. This is because the numbers represent probabilities and all probabilities must be taken into account.

Making predictions with a transition matrix

, is  a column matrix  that represents the quantities in each state at the beginning. Regarding the red and blue pill situation above, the following initial state matrix can be explained: 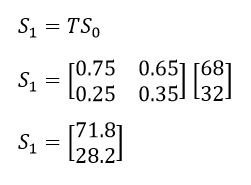 In order to find

, the transition matrix must be multiplied to

. One may think that finding

would be too tedious but the shorthand way to calculate

would be to use powers. That is,

. To find the predicted number of students who will choose either pill, the following formula can be used:

must be made. n in this case tends to infinity. Using a calculator, values of n that are greater than 30 frequently give a steady state matrix.

In order to prove a steady state, one must show that: