Events of the Cultural Revolution

As the student movement grew in size, groups of revolutionary students that called themselves Red Guards began to emerge – these groups would take the most active role in the revolution, putting up big character 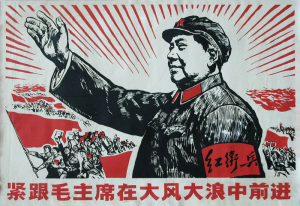 posters and denouncing those they labelled as ‘capitalist roaders’. On 18 August 1966 the first of the big Red Guard rallies was held in Tiananmen Square, to which over a million Guards flocked, hoping to catch a glimpse of Chairman Mao, who personally mingled the crowds. Eight of these rallies were held between August and November 1966, drawing over 12 million people from all over the country. Red Guards also embarked on government-subsidised trips to revolutionary sites such as Jiangxi, Yan’an, Zunyi or Mao’s birthplace at Shaoshan – in the process, they exchanged experiences, swapped Mao badges, collected memorabilia from these sites and saw different parts of the country.

At the rallies, Lin Biao urged the Guards to destroy the ‘Four Olds’: old customs, old culture, old habits and old ideas. No specifics were provided, as Mao believed that the masses should themselves steer the direction of the movement, instead of relying on the orders laid down by figures of authority. Attacks were launched on historical sites that were deemed as belonging to the ‘old culture’, with the burial place of Confucius himself badly damaged. Those in Western dress were targeted and bullied to give up their ‘bourgeois’ ways, members of the exploiting classes were forced to undergo humiliating task such as cleaning up faeces, and religion was attacked as the ‘opium of the masses’, with Tibetan Buddhist monks forced to participate in the destruction of their monasteries at gun point. On 22 August 1966, police intervention in Red Guard activities was forbidden, giving them free reign to commit 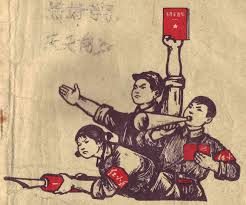 An integral part of the Cultural Revolution was the subjecting of ‘capitalist roaders’ or the ‘bourgeois’ to struggle sessions, where they would be forced to admit to their crimes and repent, often also suffering physical punishment for them. The psychological and physical pressure of these sessions led to many deaths, with 1,772 people murdered in August-September in Beijing alone, and 704 suicides related to the Cultural Revolution in Shanghai in the same month. On 23 October 1966 Liu Shaoqi and Deng Xiaoping were called before the Central Committee to deliver self-criticisms. They were denounced as forming part of a “bourgeois reactionary line” – Liu was then placed under house arrest, and later died in a detention camp, while Deng was sent away for a period of re-education and eventually put to work in a Jiangxi engine factory. In all, almost 400,000 people were branded as Rightists and forced to leave the cities for the countryside.

The Cult of Mao

The Cultural Revolution gave a great boost to the popular worship of Chairman Mao, who was seen as China’s

greatest leader. Staff bowed to his portrait three times at their places of work, while the Little Red Book was held sacred. Cultural production was confined to only those works which praised the revolution and were approved by Jiang Qing – only 124 novels were published in the whole of China during the Cultural Revolution.

As part of the effort to destroy the ‘bourgeois bureaucracy’ and unleash the ‘force of the masses’, the CCP’s six regional bureaus were closed down, while ministerial departments were purged, with Mao declaring that ‘you don’t necessarily need ministries to make a revolution’. This removed a powerful check on the activities of the provincial revolutionaries, leading to the formation of various factions of Red Guards that waged their private conflicts, each declaring the other as counter-revolutionaries. From November 1966, workers joined the Revolution, forming ‘proletarian Rebel’ groups which opposed the student-based ‘Revolutionary Rebels’. In January 1967, the worker-based Red Rebel faction in Shanghai toppled the city authorities, proclaiming a Shanghai People’s Commune. Mao gave his approval to the move on January 8, urging other local governments to rise in ‘self-criticism’ – the result was radical groups seizing power across various Chinese cities, in what became known as the January Storm.

By February 1967, many CCP leaders were calling for the reigning in of the Cultural Revolution, which they believed had spiralled out of control, threatening China’s stability. Schools and colleges were re-opened and Red Guards told to go home, while on 10 March it was announced that ‘three-in-one revolutionary committees’ consisting of soldiers, cadres and Rebels should assume leadership. The PLA was 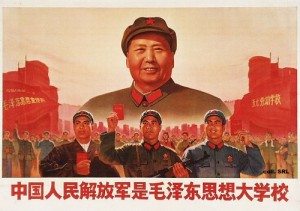 given the power to run ministries in Beijing. However, factional clashes between the PLA and Red Guards ensued, with the army increasingly taking control, running banks, granaries, warehouses and prisons in Wuhan. In Sichuan alone, the army had arrested 100,000 people. Mao saw these actions as threatening, estimating that three quarters of army officers were counter-revolutionary and supported the right. The solution, he decided, was to arm the workers and students to enable them to resist these militarist rightists. This resulted in even more violent clashes, as students attacked any symbol of authority and PLA units. The fighting of 1966-68 saw an estimated 650,000 deaths.

End of the Cultural Revolution

By September 1967 the chaos had become too much for even Mao. On 5 September, an order from Mao, the Cultural Revolution Group, the State Council and the Central Military Affairs Committee of the PLA instructed the PLA to restore order to China. The army soon forced out the urban-based rebel groups into the countryside, where the movement dwindled. At the Ninth Congress of the CCP in April 1969, the end of the Cultural Revolution was declared.

The chaos wreaked by the Cultural Revolution had a debilitating effect on the Chinese economy. The transport of goods was disrupted by the mass movement of Red Guards across the railways, and by the end of 1966 a backlog of 10 million tonnes was built up. Industrial production fell 17% in 1967. As positions of authority in companies frequently became vacant, it became common for the incompetent to grab jobs. The number of fatal industrial accidents quadruples in the 1960s. Steel production hardly reached a quarter of the planned total, while electricity generation had decreased 30%. The Revolution is estimated to have cost the Chinese economy $34 billion.

While destroying many valuable cultural relics, the Cultural Revolution did not eliminate the love of ‘old’ culture amongst China’s elite. In Beijing, almost 5,000 out of the 6,800 designated place of history were trashed. Meanwhile, loot from the homes of the bourgeoisie was often sold abroad or fell into the hands of the leadership – Mao had a personal collection of rare books, while Kang Shang placed agents amongst the Red Guard to seek out fine art for his acquisition.

Although the revolution had been chaotic and violent, it had also represented a profound change in societal attitudes. For the first time, young people felt free of traditional authority, while women played a major role in revolutionary activity. Strong female revolutionary leaders such as Nie Yuanzi and Jiang Qing served as role models for women wishing to step to the front. The cult of Mao, meanwhile, was expanded, with an estimated 2.2 billion portraits of the Great Helmsman produced, as he acquired a quasi-divine status within Chinese society.

Mao’s reliance on the PLA to restore order following the Cultural Revolution led to the increased militarisation of the government. By 1969, military men made up two-thirds of the government, while military representation on the Central Committee had risen from 19 to 45 per cent. The order to ‘bombard the headquarters’ had been taken to heart by the Red Guards, and 70-80% of regional Party cadres had been purged, while only 9 out of 23 Politburo members managed to retain their posts during the Cultural Revolution.

“finally had a leadership who, unlike their predecessors, looked, talked and thought like the people they represented” Lee Feigon

“For young women, the Cultural Revolution offered a chance to step to the front” Fenby

“the Gang of Four was at least supported by Mao.. the gang serve an instrument for Mao to realise his radical vision of ‘permanent revolution.. Together, this ‘gang of five’ created a decade of destruction and terror” Wang Ke-wen