The CCP had taken up the task of ruling a state which was fractured along hundreds of ethnic fault lines – even though the majority of the population belonged to the Han ethnic group, smaller tribes and nationalities were peppered throughout China’s massive land area. In order to assert control over these multitudes of groups, the Party felt that it had to survey them, invited ethnic minorities to identify themselves. When over 400 separate minorities did so, the CCP decided this was too many, boiling the number down to 50 and lumping together people who spoke different languages and lived in different geographical areas. These groups were subsequently put under military supervision, while the Propaganda Office stressed the revolutionary supremacy of the Han. The hopes of independence that some of these minorities harboured made controlling parts of China difficult for the CCP, leading to the use of military repression against these groups. On 7 October 1950 Chinese troops crossed into Tibet, hoping to assert what they believed was their 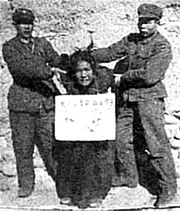 historical sovereign right of control over the region. The mountain tribesmen of the local Khamba people waged a bitter retaliatory campaign against the People’s Liberation Army, meaning that on 23 May 1951 the CCP signed a Seventeen-Point Agreement with the government in Lhasa that designated Tibet as an ‘autonomous region’ of China. The Agreement forced China to give the Lhasa government control of domestic matters, but secured the CCP’s right to determine Tibet’s internal security and foreign policies. Despite this relative independence, traditional Tibetan practices soon began to be undermined as the central Chinese government brought roads, electricity, constructions projects and highways into the region. Following a March 1959 Tibetan rebellion against the agrarian policies of the CCP, the PLA led an overwhelming military campaign on Tibet, using heavy artillery, tanks and air strikes. Although the pro-independence Tibetan insurgency continued for some time, supported by the American CIA, but was eventually largely suppressed by the People’s Liberation Army.

“The People’s Republic had thus shown that it could match the colonial scope of the last dynasty, forgetting talk of independence for Inner Mongolia or better treatment for Tibetans in the interests of the new Chinese Empire” Johnathan Fenby.

Chinese troops crossing into Korea during the war

between the South and North in Korea which implicated both Communists and the ‘biggest imperialist’ America. Korea had been divided at the 38th parallel, into North and South, at the end of World War 2, with the Communist government in the North headed by Kim Il-Sung and supported by Soviet military equipment. The North pursued an increasingly expansionist policy, nurturing ambitions to wrestle back the South from the American-backed government of Syngman Rhee – the idea found ample support amongst the North’s Soviet backers, including Stalin. On 5 June 1950 North Korean troops crossed the 38th parallel, breaching the conditions of the ceasefire that had been set following World War 2. In response, Western allies launched a counter-offensive on 15 September, with US troops led by General McArthur quickly capturing the North’s capital Pyongyang and advancing towards the Chinese border. Sensing his dire situation, Kim Il-Sung begged Mao for help. There was some hesitation before a decision on whether or not China was to enter the conflict was taken. Mao, Zhou Enlai and Zhu De argued that a Chinese intervention was necessary, as it was not in China’s interests to lose a Communist ally to US ‘imperialism’ or have to deal with a hostile government in North Korea – PLA general Lin Biao and China’s leading economist Chen Yun, meanwhile, urged caution, wary of China’s comparative economic and military weakness. Made confident by the promise of Soviet air support, the interventionists won out. On 15 October 1950, 2 million Chinese troops crossed the North Korean border, marking China’s entry into the Korean War. Despite the Soviets failing to deliver the promised air support, the Chinese advance proved remarkably effective – within 7 weeks, they had recaptured North Korea. However, in January 1951 the UN/US launched an effective counter-attack, forcing Chinese and North Korean troops to agree to a ceasefire in July 1951 and eventually to the Panmujong armistice on 27 July 1953, putting an end to the armed conflict. This left Korea divided and the North weaker economically than it had previously been, as well as carrying various implications for China. A UN resolution was passed labelling China the aggressor – this triggered an economic embargo on China and its exclusion from the United Nations, where ‘China’ was instead represented by the Republic of China that Chiang Kai-Shek had founded in Taiwan. A large amount of 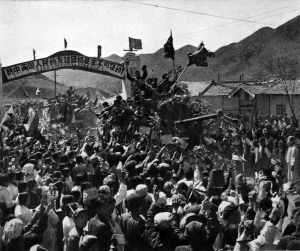 industrial resources had been contributed to the war effort, leaving China economically drained and more reliant on Soviet aid. In addition, Chinese troops had suffered disproportionately large casualties as compared to their Western counterparts – 900,000 Chinese were reported killed, missing or wounded, while only 157,000 American and UN troops were out of action. Mao later admitted the decision to engage in the conflict had been a mistake, ‘100 percent wrong’.

“seen as proof of enhanced status.. Beijing became the beacon of the anti-imperialist cause” Fenby

“the Korean war was hailed as a victory for the PRC. After a century of humiliating defeats by foreign powers they had held off the USA and its allies” Sowdon