Sensing that his hard-handed political and economic measures were facing criticism from some quarters, on 27 February 1957 Mao made a speech to the Supreme State Conference where he argued that although class conflict had

ceased in China, there would be other contradictions within the party and country that could be resolved through the Maoist approach of unity-criticism-unity. He proposed that the Party be more open and responsive to popular sentiment and encouraged intellectuals to express their grievances so that these could be addressed and thus strengthen the Party in the long term. The campaign was encapsulated in Mao’s urging to “let a hundred flowers bloom; let a hundred schools of thought contend”. This was the ultimate embodiment of Mao’s concept of the mass line, the idea developed at Yan’an that the Party must learn from the people.

Following the speech, Mao made a three-week train ride through eastern China to participate in stage-managed meetings with peasants and workers where concerns could be aired.

Calmed by this seeming display of openness, Chinese intellectuals, students and workers began to speak their mind about the new regime. The Guangming Daily criticised the nature of CCP rule, stating in its editorial: “a party leading a nation is not the same thing as a party owning a nation”. Mao himself, as the embodiment of the Party, came under attack – one writer called his ‘Yenan talks’, which had formed the foundation of policy on art and literature, ‘conservative, far beyond the situation now developing’, and another pointed out his ‘arbitrary and reckless character’. The discontent was made evident through the rising amount of protests and strikes in 1957, with Shanghai seeing protests involving 30,000 workers and 587 enterprises in the spring.

Shocked by the vehemence of the criticism and fearing for his own reputation, Mao backpedalled. On 8 June 1957 an editorial in the People’s Daily signalled the end of the Hundred Flowers Movement. Mao’s February speech, ‘On the Correct Handling of Contradictions’ was revised, and distinctions added between ‘antagonistic’ and ‘non-antagonistic contradictions’, with the speech now warning against ‘poisonous’ ideas that were contrary to socialism, divisive, critical of the democratic dictatorship, democratic centralism and the CCP. There is some historical debate regarding the original purpose of the Hundred Flowers Movement. Some claim Mao’s speech was later edited in such a way as to make it look like as if Mao had set a trap for opponents of the regime and had been planning to lure them out so that they could be destroyed. Others, however, view the sudden backtracking as spontaneous, a result of Mao’s shock at the brutality of the criticism he personally received. 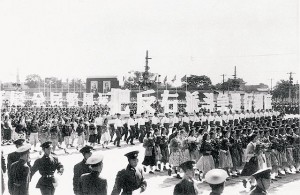 The outcome of the Hundred Flowers Campaign, however, was the launching on an Anti-Rightist campaign headed by Deng Xiaoping, in which tens of thousands of academics and students were put through denunciation meetings. Institutions were required to expose a quote of 5% of staff as rightists, leading to 300-400,000 ‘rightists’ being sent for re-education through labour, which effectively amounted to police sending people to camps without trial. Non-CCP members were also targeted, with 40% of members of the GMD Revolutionary Committee and Democratic League parties being found to be following an ‘anti-Communist, anti-people, anti-Socialist bourgeois line’. The result was to strengthen the leaders’ belief that party unity was to be the number one priority – as Liu Shaoqi told an Indian delegation ‘no matter whether the Party’s line is correct or mistaken, the Party must safeguard its unity… A party split is more damaging that a defeat to the revolution’.

“it became a trap not for the few, but for the many.. For the hundreds of thousands of loyal citizens who had taken the Party at its word” Ryan

“It was rather, a muddled and inconclusive movement that grew out of conflicting attitudes within the CCP leadership.” Jonathan Spence