Last Decade of Communist Rule and Outcomes of the Period 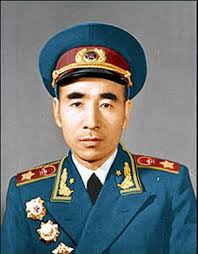 Following the Cultural Revolution Mao became critical of the leader of the PLA, Lin Biao, as he believed that the military had been too hard in its treatment of cadres during the Revolution. Although Lin tried to flatter Mao and prove his loyalty to him, Mao became increasingly distrustful of the general. Sensing that the purging of Lin was inching closer, his son Lin Liguo took part in a plot to overthrow Mao, developed in August-September 1971 and labelled Project 571. The plot was uncovered when Lin’s sister Doudou reported on her brother, forcing the family, including Lin Biao, to flee China. On 13 September 1971, the plane carrying them crashed, leaving no survivors. The sudden fall from grace of one of the regime’s most prominent figures was shocking for many Chinese, forcing some to question their trust for the government.

Zhou Enlai and the Gang of Four

At the 4th National People’s Congress in January 1975 Premier Zhou Enlai brought back many cadres who had been purged during the Cultural Revolution. Having support the purging of many of these cadres, the Gang of Four (Yao Wenyuan, Jiang Qing, Zhang Chunqiao & Wang Hongwen) opposed Zhou’s efforts, using the campaign to criticise Zhou and his policies. Following Zhou’s hospitalisation, Deng Xiaoping took over his functions as Premier, with the Gang of Four now directing their attacks against him. Mao also remained suspicious of Deng. Following Zhou’s death on 8 January 1976, Mao refused to give him a public memorial service and ordered 10,000 police to disperse people who had laid wreaths in memory of Zhou on Tiananmen Square in April. Convinced that any honouring of Zhou was an attempt to bring his associate Deng into power, Mao purged Deng from the Party again later in 1976. Following Deng’s purging, it was Mao’s successor Hua Guofeng who bore the brunt of the Gang of Four’s attacks, before having them arrested in October 1967, following Mao’s death.

Outcomes of the period

In the 1970s, the education needs of country people were more widely considered – the number of schools in villages increased, and literacy rose to 83% by 1970 (compared to only 20% in 1950). The election of village leaders became more independent, while increased state expenditure in the agricultural sector allowed for greater mechanisation of basic machinery. There were also attempts to bridge the rural-urban divide through ‘rustification’ programs. Between 1968 and 1972, 17 million young people lived and worked with peasants and workers in state-owned provincial industries, in what was known as the ‘Up to the mountains, down to the countryside’ campaign. While some went voluntarily, many were coerced, and never gathered the means to leave the village where they had been stationed. On 7 May 1968 ‘May Seventh’ schools were launched – these were farms and industrial enterprises where CCP cadres would carry out heavy labour in order to learn to identify with the peasants they were governing. Although millions did so, participation was often reluctant.

Workers became more politicised than they had ever been, being allowed to set up their own local ‘revolutionary organisations’. Compared to the early period of Communist rule, life expectancy rose from 36 to 57 years, urban housing standards improved and urban incomes increased by 40%. Workers were also provided with subsidised housing, medical care and educational facilities.

Women began to gain prominence in some non-traditional gender roles, namely participating in the PLA. 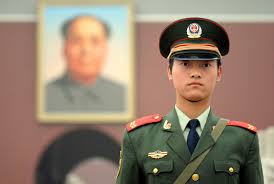 A female soldier at Tiananmen Square

They readily participate in the people’s militia, a rural volunteer peace corps that was engaged in an act of defence of the motherland along the border with Vietnam and the Fujian coast. Historians Lily Lee and Sue Wiles, however, argue that Chinese women were still largely excluded from the all-male party hierarchy, with women continuing to work on issues related to women and thus maintaining traditional gender roles1

The 1970s saw the rise of ‘barefoot doctors’, peasants with basic medical training who transversed the countryside bringing rudimentary health care to millions. The number of barefoot doctors reached 1.7 million by 1977, up from 1 million in 1970. During the last half of the 1960s, rural electricity’s share of national energy consumption increased from 1.36% to 10.9%2 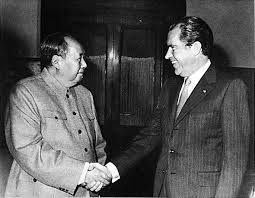 Mao with President of the US Richard Nixon who visited China in 1972, marking a thaw in China-US relations

The period brought increasing advances for China on the diplomatic front. On 25 October 1971 it gained a seat on the United Nations Security Council, the highest decision-making body in the organisation, and on 25 September 1972 it released the joint Shanghai Communique with the US. The communique marked the thawing of relations between the two states, proposing further Sino-US cultural and diplomatic exchanged, and ensured that China would not face a military threat from both the US and USSR. Furthermore, the CCP continued support the worldwide communism movement, with 7% of GDP dedicated to funding Third World revolutionaries3. However, it was unable to secure complete allegiance from any communist country – Cuba’s Fidel Castro remained pro-Soviet, as did Vietnam and North Korea.

“out to permeate national existence.. intruded on civil organs and private life at will” Fenby

“1949 had brought not paradise but a deeply divided society” Fenby