Following the agricultural and industrial havoc wreaked on China by the Great Leap Forward, the country began to return to more moderate production methods under the Presidency of Liu Shaoqi. The size of communes was halved, work teams were now made up of 30 people instead of a 1000, workers received direct rewards of surpluses and good work, and urban overcrowding was reduced by sending over 26 million migrants back to the countryside. The People’s Liberation Army was mobilised to distribute food to famine- 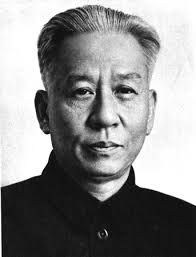 stricken areas. The 7000 Cadres Conference in January 1962 endorsed the policy of ‘Three Privates, One Guarantee’, which allowed peasants to privately farm their arm pots, own some land and sell handicrafts for profit (three privates), while fulfilling government production quotas (one guarantee). Mao also offered a self-criticism at the conference, stressing, however, that the Party’s failings were collective and must be admitted by all – the Chairman was also critical of the overly bureaucratic manner and privileged position of some CCP officials. Somewhat uncomfortable with what he saw as an unnecessary return to capitalism, Mao left Beijing following the conference, leaving Lui Shaoqi, Deng Xiaoping and Zhou Enlai in charge.

The moderation of Leap policies and the re-introduction of some private ownership elements into the Chinese economic system led to a marked improvement in the economic health of the country. In 1961-62 grain production went up from 6 million to 10 million tonnes. In 1963-65, heavy industry grew 17%, while light industry grew 27%. In 1960, the government had had a deficit of 8 billion yuan – by 1962, it had been turned into a surplus of 1 billion.

Corruption and a lack of socialist values amongst provincial officials was seen as one of the primary reasons for the disastrous result of the Leap – on 24-27 September 1962 the Tenth Plenum of the Central Committee endorsed a new campaign to address these problems. Labelled the ‘Socialist Education Movement, the campaign aimed to clean up abuses in the CCP and make cadres more responsive to the people through focusing on 4 areas: communal grain holding management, allocation of work points in Commune labour, accounting procedures and care of public property. 2 million Party agents were sent out to implement these Four Clean-ups investigated 2,530 state enterprises and communes. Their findings deeply shocked the regime, which had previously been unaware of the extent to which its government apparatus had deviated from its socialist goals. More than 100,000 cases of corruption were reported by the public, with waste amounting to 103 million yuan by officials uncovered in just four cities. In parts of the province of Hunan, the CCP branches had collapsed completely or were controlled by renegade officials, leading to local authority being transferred to peasants associations. A series of directives that governed the nature of the anti-corruption movement were issued:

Launched by the Central Committee on 27 February 1963, the Early Ten Points mobilised poor peasant associations to enact the Socialist Education Movement. Under this plan, peasants were to play a central role in the exposure of cadre corruption.

As the Early Ten Points struggled to make headway, in September 1963 Deng Xiaoping launched the Later Ten Points. These cast work teams of reliable officials as the primary instrument for uncovering corruption – the work teams would be appointed by central authorities and would travel to regions suspected of corrupt practice, guiding peasants in appropriate action. Deng’s Later Ten Points were more moderate than their earlier version, making no mention of ‘class struggle’ between peasants and cadres so as to avoid the disruption of agricultural work that could occur should peasants choose to use violence.

Wanting to accelerate the cleaning out of the bureaucracy, on 10 September 1964 Lui Shaoqi released the Revised Later Ten Points. Larger work teams were authorised to back peasant complaints and assume leadership if local cadres were incapable of reform. A purge of party organisations was carried out. The work teams often acted in a dictatorial manner, replacing peasants as the primary agents of revolution, and worrying Mao, who feared that China could take the Soviet path of becoming a bourgeois-bureaucratic state machine where peasants played no active revolutionary role.

During this period, the CCP began using certain individuals, communes and groups as propaganda material, showing them as examples of perfect socialism. These campaigns were aimed at motivating the Chinese population to learn from and emulate their stringent socialist values and productiveness.

Learn from the PLA

Launched on 1 February 1964, this campaign held up People’s Liberation Army soldiers as possessing virtues that all Chinese should strive to have. The army was made increasingly political, with political commissars appointed to all levels of the military to oversee political study. Socialist equality was advanced within the troops by abolishing insignia and distinctions of rank, while the participation of soldiers in cultural activities aimed to strengthen the link between them and the people. Emphasis was placed on the ideology of the ‘Four Firsts’ – the primacy of the human over the material, the importance of ideology, the primacy of political work over other tasks, and the importance of importance of integrating theory and practice. To accompany the campaign, in May 1964 Defence Minister Lin Biao published “Quotations from Chairman Mao Zedong”, or what became known as the ‘Little Red Book’ – a collection of revolutionary quotes from Mao that citizens and soldiers alike were expected to learn by heart and follow in every one of their actions. 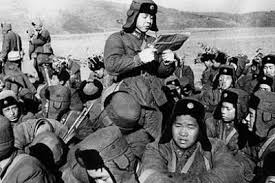 Lei Feng reading to the troops

The campaign centring on the life of PLA soldier Lei Feng was launched on 5 March 1963. Feng was held up as the paragon of revolutionary virtue – an orphan, he had joined the Communist Youth League, gained respect as a model worker, worked as a truck driver in the PLA, never sought recognition of good deeds and was dedicated to Mao Zedong Thought. His selfless deeds, admiration of Mao and revolutionary zeal were reflected in the diary that was found shortly after Feng’s death from a workplace accident. Feng was to act as the model revolutionary, unswervingly loyal and dedicated. However, historians question the authenticity of the diary and Feng’s mythologised existence, with historian Nicholas John Cull saying it was “almost certainly concocted by party propagandists”.

From 1963 onwards the commune of Dazhai, province of Shanxi, was held up as a model of revolutionary diligence and work ethic. The commune and its leader, Chen Yonggui, were praised for their unorthodox methods, such as working during the night as well as the day, and continuing work in the depth of winter. Farmers throughout China were encouraged to “Work bitterly, diligently, and with extra energy to build our village into a Dazhai-like one in three years”, and many went on state-funded trips to Dazhai where they could witness the major irrigation projects and villager residential areas. Inspired by this example, farmers often blindly moved hills, built reservoirs, tunnels and canals that later prove of little use economically or agriculturally. Chen Yonggui was appointed to the position of vice premier, despite being semi-literate and the campaign spread throughout China. Extraordinary claims were made about the commune’s productiveness, with production said to have gone up four fold over the last 20 years – many of these were questioned following Mao’s fall from power.

The early 1960s saw the definitive split of the alliance between China and the Soviet Union. Fractures had begun to show in 1956, when on 25 February Khrushchev denounced Stalin, who Mao had publicly supported as ‘a friend to all people everywhere and a friend to the Chinese people’. Relations became further strained when in mid-1959 Moscow informed Beijing that it would not provide China with nuclear weapons and refused to lend support to China in its border clash with India. By the early 1960’s, Russia recalled 1400 Soviet scientists and engineers from China. The split was caused by various factors, one of them being the Chinese perception that mass movements such as the Great Leap forward could bring about communism faster than the experience and bureaucracy favoured by the Soviets. Furthermore, the Chinese accused the Soviets of neglecting ideology and permanent revolution in favour of ‘goulash communism’, i.e. providing its people with material comfort. On 14 July 1964 China severed formal diplomatic relations with the USSR, increasing the number of troops along the Russian-Chinese border. To prove its revolutionary supremacy, on 16 October 1964 China detonated its first atomic bomb, without the help of the Soviets. China was now firmly set on its independent revolutionary path.

“conformity was to rule” Fenby

“for the moment, class warfare would not be allowed to impede the work of recovery” Fenby