Reasons for the Leap

Despite strong industrial growth following the First Five Year Plan and the increasingly commune-based nature of the Chinese countryside, by 1958 economic production levels were considered too low by the regime. Mao wanted to make China a “first-class modern power”, which included stimulating economic growth enough so as to clear debts owed to the Soviet Union – he believed that this could be achieved by harnessing the power of the Chinese people to work collectively. Based on these ambitions, on 5-23 May 1958 a conference launched the Great Leap Forward, a declaration of revolutionary intent that urged officials to ‘let the people explode’. The production targets of the Second Five-Year Plan were revised upwards by 17-20% and complete collective organisation of the countryside was encouraged, building on the gains made by ‘Higher’ Agricultural Co-operatives in the years prior. China now aimed to surpass the economic production of Britain in 15 years. On the backs and energy of the Chinese people, Mao hoped to build a socialist powerhouse.

At a conference from 17-30 August 1958 Mao called for an enlarged meeting of the Politburo to establish People’s Communes – larger and more integrated versions of the ‘Higher’ Agricultural Co-operatives that already existed. The move was made in the belief that larger communes would allow larger-scale farming. In 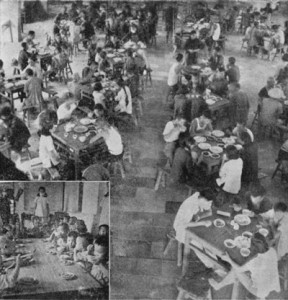 A canteen in a People’s Commune

the Communes, all land ownership and farming became collective, as did tools and livestock. They were organised along military lines with units of ten to twenty brigades, and took administrative responsibility of everything from public welfare and schooling to public defence and large nurseries that allowed parents more time to work. The Commune in essence became an all-encompassing social organisation that governed every aspect of its members’ lives. By the end of 1958, 740,000 Agricultural Co-operatives had been reorganised into 26,000 People’s Communes. Each Commune averaged 5,000 households, with total populations equalling up to 100,000 people. Peasants could eat as much as they liked at communal kitchens – this often led to the food supply being consumed to quickly and later causing malnutrition, with a Guangdong commune consuming the 6-month rice supply in 20 days and soon being forced to rely on thin gruel and grasses for nourishment. New agricultural technologies abounded, often at the expense of the time-honoured wisdom of the Chinese peasant – one of the most popular was Lysenkoism, the practice of close planting and deep ploughing of seeds. Lysenkoism was an attempt to increase farm output, but instead led to poor quality crops and lower yields as they were planted too closely together and too much fertiliser was used. The cadres who worked in Communes were sometimes abusive of the peasants – historian Frank Dikotter estimates that at least 2.5 million people were beaten or tortured to death and 1-3 million committed suicide during the course of the Leap.

Following the launch of the Leap, it soon became clear that the steel industry would struggle to meet the proposed targets. In response, a campaign to build ‘backyard’ steel furnaces was introduced, whereby ordinary citizens would produce steel from makeshift furnaces in their households. Mao had gotten the idea after bein

g shown a simple furnace said to be able to produce high-quality steel – the metal presented to him, however, had in fact been made elsewhere. Ignorant of this fact and excited by the prospect of mobilizing mass labour on a local level to meet production targets, Mao poured 5 billion yuan into the campaign, with 100 million people labouring at the furnaces and associated enterprises by 1958. Household items such as pots and pans, scissors and cooking utensils were smelted down to produce steel, with the catchcry being that ‘The more metal you collected, the more revolutionary you were’. However, the quality of this ‘backyard’ steel was dubious – the campaign produced 3 million tons of unusable steel as compared to 8 million tons of usable steel. In addition, constantly labouring at the furnaces removed people from the fields, affecting the growth of agriculture.

Heavy industry was run completely by state-owned enterprises, with all private enterprises having ceased function. These SOEs proved inefficient, as there was no profit motivating workers to show initiative and the surplus of production went to the state rather than acting as a reward for workers. As a result, in 1958 China’s total iron output reached only 7 million tonnes, of which just 40% would be good quality. The Chairman’s trust in the ‘spontaneous creativity of the people’ was such that experts in industry and agriculture were disregarded, even discriminated against, while the state statistical bureau was dismantled.

Results of the Leap

As the Great Leap Forward progressed, it became clear that some of its aspects were unsuccessful. Recognising this fact and his own partial failure, in April 1959 Mao took the symbolic step of conceding the Presidency to Liu Shaoqi, while remaining Party Chairman – Liu set about endorsing more pragmatic measured and moderating the Leap. Fact finding missions were sent out to the countryside, whereby leading Communists travelled to various regions to investigate problems. However, local cadres often told officials what they wanted to hear, fearing later persecution if they did not show faith in the Leap and hoping to advance their own positions – as a result, most leaders came back with the idea that the Leap needed adjustments, but was, on the whole, a fine idea. However, General Peng Dehuai, who had led Chinese troops in the Korean War, conducted a deeper investigation into the Leap and was appalled by what he found, sharing his concerns with Soviet leader Khruschev. In July 1959, at a plenum of leading CCP figures in Lushan, Peng argued that there was serious fault in the very idea of the Leap. This, combined with Krushchev’s recent criticism of the People’s Communes, threatened Mao and his supremacy in the party. On 23 July Mao made a speec in response, in which he took ‘primary responsibility’ for the failures, while making sure to point out that other delegates were also to blame. He threatened that if the Central Committee were to not support him as leader due to these failures, he would go to the people, raise another Red Army and eventually battle back power. Under this pressure, on 16 August 1959 the Central Committee condemned Peng as an ‘anti-party’ element and reaffirmed the General Line of the Great Leap Forward. A new Anti-Rightist campaign was carried out to silence and punish any other ‘little Peng Dehuais’ in the Party. The example of Peng made cadres increasingly reluctant to criticise Mao’s actions and ideas.

The methods used in the Leap contributed to the spread of famine across the Chinese countryside. Although the 1958 harvest promised to be large, the amount of labour diverted to backyard steel production and heavy industry meant that a large portion of the harvest was left to rot uncollected in some areas. Despite this, the government continued collecting up to 90% of the harvest, basing its procurement quotas on faulty statistics supplied by cadres eager to please the central leadership, which indicated a sizeable surplus. Conscious of the discontent amongst some peasants, on 10 December 1958 the CCP’s Wuhan Plenum reigned in the more radical aspects of the Leap, reducing production quotas – it was decided that 370 million tonnes of grain would be harvested, instead of the previously set target of 450 million tonnes. However, this quota was still not in touch with the reality of the Chinese 1959 harvest, which reached only 170 million tonnes. By April 1959, 15 provinces were suffering drought and 25 million people needed urgent relief supplies of food. In the autumn, a figure of 270 million tonnes was set as the grain harvest quota – 100 million above what the true harvest was.

By this time, famine was beginning to take hold. Food allocation was used as a political tool, with those labelled as ‘black elements’ (religious leaders, rightists, rich peasants) in previous campaigns given the lowest priority in the allocation of food. The Chinese government remained almost wilfully ignorant of the scale of the famine, refusing foreign aid, continuing to export grain to the Soviet Union, and destroying statistics in regions where population decline became evident. At the height of the starvation, 22 million tons of grain was held in public granaries – an order from the central government however, ordered “absolutely no opening of the granary doors”, as Mao believed that “it is better to let half of the people die so that the other half can eat their fill”. The famine crisis was exacerbated by flood, droughts and locust plagues – up to 31 million people were believed to have died of starvation in 1959-61. By 1960, the government was forced to admit the scale of the problem, and begin scaling back the Leap.

“the docility of the Chinese peasantry who were remarkably inured to the dictates of authority because it represented the peace and order on which their livelihood depended contributed to the GLF.. The people trusted Chairman Mao” Fairbank

“an apartheid system for chinese households” Raph A. Thaxton Jr.

“to begin with, it was not without sense… But as time went on, it became more a vision than a rational economic program” Fenby

“the Chinese path to socialism had led over a cliff” Fairbank

“Mao was unwavering in his pursuit of utopia” Frank Dikotter

“farmers found themselves under bosses ignorant of agricultural methods” Fenby

“it was a failure on a grand scale” Meisner