In the late 1890s China was increasingly succumbing to foreign influence, with British, American, German and French concessions (areas of influence) present in many coastal cities. Trade with Westerners was often accompanied by the arrival of missionaries who brought Western customs, sometimes scandalising local 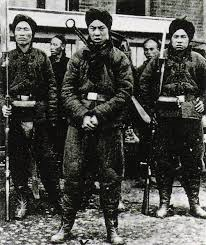 Chinese with practices such as mixed church services. Western governments could also act aggressively to protect their business interests, with the Germans launching a military expedition in the northern province of Shandong in the spring of 1899 to protect their mine prospectors – this, and the aggression of some German Catholic missionaries enraged locals and Shandong saw an estimated 1000 anti-foreign incidents and protests that year as a result. The Boxers, a society which practiced martial arts and was violently hostile to foreigners, began to gain increasing influence by drawing on these tensions. Originating in 1808, the Boxers espoused the battle-cry of ‘Support the Qing, destroy the Foreign’ and were given large amounts of secret funding by the Viceroy of Shandong. They spread across the Hubei and Shandong provinces, gaining popular support through acts such as murdering Christian converts and destroying Western constructions.

Boxers and the dynasty

The Viceroy of Shandong lauded the Boxers to Empress Cixi, eventually convincing her that the group would help her save China from the humiliation it was facing at the hands of foreign powers. By mid-1900, imperial edicts which funded and assisted the Boxers had been passed, and Manchu nobles were hiring Boxers as personal guards. At the same time, the court faced increasing pressure from Western legations to supress the anti-foreign violence of the group – doing so, however, threatened to turn this patriotic organisation into an anti-Qing movement. Empress Cixi made the choice to continue siding with the Boxers, fearing that casting them aside would mean “losing the people’s hearts” which were the only thing that could be used to sustain China. 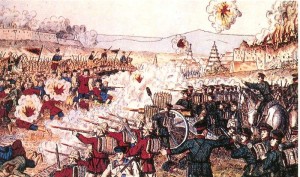 Alarmed by the increasing anti-Western violence, in early June 1900 the British dispatched a ‘precautionary force’ to Beijing. This was taken as an act of war by the Qing, who dispatched the Boxers to attack and beat back the British force. In retaliation, on June 17 the British captured coastal forts and prepared to assault Beijing – eager to protect itself, the Qing dynasty declared war on all foreign powers on June 21. Thus began the siege of Beijing, which lasted until August 14, when an 18,000-strong European-American-Japanese coalition marched on Beijing and captured it, forcing the Imperial Court to flee and carrying out acts of rape, loot and pillage in Beijing and the Forbidden City.

The foreign coalition was able to secure victory largely due to their greater military might and resources. They assembled a force of 54,000 soldiers and 51 ships, and used modern machinery such as guns and cannons. The Boxers, meanwhile, rejected the use of rifles in favour of relying on swords, spears and martial arts, and where therefore no match for foreign forces. The central Qing government’s inability to command authority over regional China also played a part – when Cixi called on regional warlords to send backup troops, most were eager to protect their financial ties with Western merchants and instead employed their armies to protect foreigners in their regions (Ryan).

Following its defeat, China was forced to accept a number of humiliating conditions outlined in the Boxer Protocol, which was signed on September 7, 1901. The terms included:

The extent of China’s weakness was made clear by the defeat and Boxer Protocol – this led the Qing regime to embark on a program of reform to strengthen the country.

“The other main result of the abortive attempt to expel all foreign influence and remove all foreign residents – an objective wholly out of line with reality in the world of that time – was to turn the whole nation towards revolution. …The mood of the country was radical; no one really supported the outworn monarchy; even its own members were without confidence and initiative. The failure of the Boxer Rebellion destroyed any remaining chance of averting revolution. It was only a question of time and opportunity.” C P Fitzgerald

“[The declaration of war] was Cixi’s greatest mistake… It was a sign of the bankruptcy of the regime that also believed in its invulnerability.” Jonathan Fenby

“The Boxer episode manifested the strength of grassroots anti-foreign sentiment, and buttressed the link in Chinese minds between foreign aggression and Christianity.” Jonathan Fenby