China in the late 19th century

Chinese society was built on the concept of Confucianism, a philosophy based on the importance of personal virtue in bringing about social harmony. This philosophy provided a guide to behaviour and social relationships, with people in positions of authority obliged to care for and guide those below them, who in turn had to obey their superiors. At the very top of this social hierarchy sat the Emperor, who was believed to 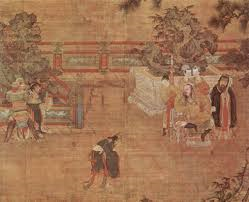 A depiction of the Chinese imperial court

China had been ruled by the Qing regime since the 17th century. Ethnically, the Qing were Manchus, from the north-east of China, while the majority of the territory they ruled over was populated by Han Chinese. The Qing dynasty adopted many Chinese civil and cultural structures but also introduced their own, including all Han Chinese men wearing Manchu-style dress on pain of death. Manchus were often given preference at court, leading to some resentment towards them from the Han majority.

The governance of China’s 410 million citizens was placed in the hands of only 40,000 civilian and military officials. Magistrates, who were responsible for governing districts, were supposed to apply Confucian principles to ensure harmony and stability, being required to undergo a rigorous three-stage imperial 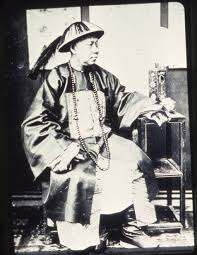 examination to qualify for the role. But by 1850, only 60% of magistrates had done so, with half of them buying their degrees through corruption1.

Not only did they often lack practical knowledge, but the administrative code which they followed did not account for regional differences and requirements. As a result, magistrates were often unable to meet the needs of the people they governed. A culture of bribery and regional power developed, with magistrates interested in securing their own influence and interests rather than strengthening China as a whole. The officials on which the Qing regime relied to carry out later reforms therefore had a vested interest in perpetuating the existing state of affairs and resisting change.

80% of China’s population consisted of peasants, with an average life expectancy of 25 years. Poverty was 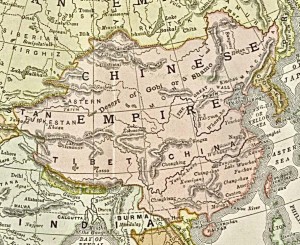 China under the Qing empire

widespread, with most peasants living on the edge of subsistence in homes of earth, mud, bamboo and bricks. Peasants often suffered under the rule of magistrates, who imposed high taxes or demanded bribes, and rural riots regularly erupted in response to high grain prices or new taxes. Few rural Chinese owned land, with 60% of land being owned by wealthy Chinese in the 1850s. With little chance of moving up in the social hierarchy because they could not afford the education needed to become a civil servant, peasants mostly strived to simply survive, with crop yields and the amount of tax they had to pay for them being their main concerns.

The expansion of Europeans into Asia brought both trade opportunities and tensions for the Chinese, who viewed themselves as racially superior to the Europeans, dismissing them as ‘an insignificant and detestable race’. Conflicts in the early 19th century had ended in European victory, a result of which were the ‘unequal treaties’ – these ceded Hong Kong to Britain and opened more Chinese ports to foreign trade, as well as granting British citizens immunity from Chinese law. Not only was this humiliating for China, but it also led to the increased presence of foreigners on the Chinese mainland. Missionaries attempted to bring Christianity to the Chinese, often being unconsciously provocative with their customs, such as mixed-sex services, that clashed with Confucian values. Port cities saw an expansion of concessions, areas of foreign influence where the law of the foreign power, rather than Chinese law, was applied. This amounted to a slow colonisation of Chinese territory by European powers, leading to resentment from the local population.