Establishment of the CCP and First United Front

Founding of the Chinese Communist Party

In 1918 the librarian at the University of Beijing, Li Dazhao, founded a study group that explored Marx’s theories of communism called the ‘Society for the Study of Marxism’, of which Mao Zedong, the future leader of China, was a member. The communist regime in Russia was just beginning to establish itself at this time, 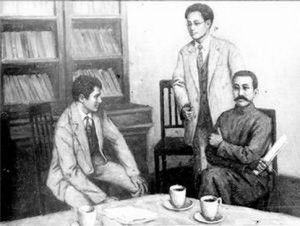 and many Chinese intellectuals looked to it as an example of how a communist state could be built. In 1919, the Russian regime formed the Comintern, an organisation devoted to fostering the progress of Communism in other countries – by April 1920, Russia had sent a researcher to China to assess the extent to which a Communist revolution could be carried out there. Russia had also curried favour with Chinese intellectuals by renouncing all former Russian concessions in China, as part of its rejection of imperialism. On the 3rd of June 1921 the Communist Maring was sent to China to create a Chinese Communist Party, and the First National Congress of the CCP was held on July 23, 1921.

Establishment of the First United Front

During the Warlord Era, Sun Yat-sen set up various successive governments in the south of China, sometimes allying with southern warlords in order to ensure the stability of these governments. Sun’s aim was to eventually recapture the rest of China and impose his program of the Three People’s Principles – for this, he needed funds. Support came from the Soviet Union who saw revolutionary potential in the Kuomintang and relished the prospect of having a communist China as an ally. In August 1922 Sun Yat-sen met with Comintern

Agents Maring and Joffe to discuss the reorganisation of the KMT and conditions for Soviet aid. These conditions included the unification of the CCP and KMT, as the Soviet Union believed that together these revolutionary parties could have a greater impact – they may have also hoped that the CCP would sway the KMT further to the left and capitalise on its established follower base in order to establish communism in China. On the 26th of January 1923 a joint manifesto was released by Sun and Joffe, declaring the new alliance and outlining its urgent goals as ‘national independence and unity’. However, at the urging of Sun, the manifesto also conceded that China was not yet ready for communism. The first congress of the United Front was held on 20-23 January 1924. The CCP received 3 out of the 24 seats on the Central Executive Committee and the Front adopted Russia’s organisational plan, which put the party above the government – meaning that whoever controlled the central party institutions could exercise autocratic power.