Following the establishment of the First United Front, the KMT began building up its military forces in preparation for an eventual campaign on Beijing. On 1 May 1924 the Huangpu Military Academy (also known as Whampoa) was founded, aiming to train troops and indoctrinate them in Nationalist (KMT) ideology. As a 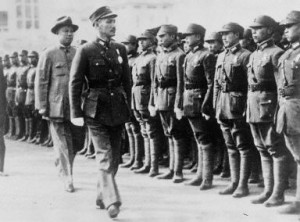 Chiang inspecting the cadets at Huangpu

condition of receiving Soviet aid, the KMT accepted CCP members into the Academy. Despite the aspirations of the Soviets, however, the make-up of the academy was not entirely revolutionary – educational requirements meant that three quarters of the initial intake was made up of sons of landlords, middle-income peasants or officials1. The Huangpu ideology centred around living by revolutionary principles – they did not conscript soldiers or loot villages, and promised land reform, encouraging peasant support for the KMT. Obedience and loyalty to their commander, Chiang Kai-Shek, was strongly imposed on recruits, of which the Academy trained over 7000 in 2 years.

On 11 March 1925 Sun Yat-Sen died from liver cancer. His final testament urged for the continuation of the 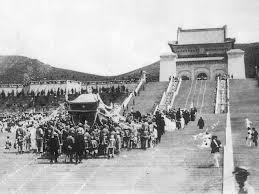 struggle for national reunification, stating that he was ‘leaving behind a party which will be allied [with the CCP] in its historical task of liberating China and other supressed peoples from the yoke of imperialism’. It did not take long, however, for divisions in the United Front to show. By August 1925 a right-left split developed within the KMT, with the left faction led by Wang Jingwei and the right by military commander Chiang Kai-Shek. The right coalition soon found an opportunity to discredit the left. On 20 March 1926 a CCP gunboat moved downriver towards where Chiang Kai-Shek was based – Chiang alleged that this constituted a kidnapping attempt on him, thus giving him reason to attack the Communists. In May a resolution was passed to exclude and attack CCP members within the KMT, stating that ‘Comrades on the left…. should retire for a while’. The reasons for Chiang’s push against the CCP include not only his struggle for personal power, but also the underlying class divisions that existed between the CCP and KMT. KMT members were largely part of the very landholding classes that the CCP’s ideology aimed to dismantle through proletarian struggle, and therefore had a vested interest in ensuring that no Communist revolution occurred in China.

Mobilisation of the Northern Expedition

On 1 July 1926 Chian Kai-Shek ordered the mobilisation of the Northern Expedition – a military campaign that aimed to march from the south to the north, recapture provinces from warlord factions along the way and eventually establish KMT rule in Beijing. Chiang himself phrased the goals of the Expedition as ‘protecting the welfare of the people by overthrowing all warlords and wiping out reactionary power so that we may 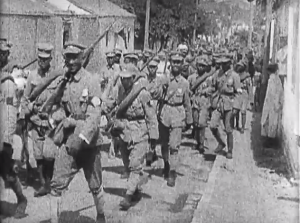 implement the Three People’s Principles and complete the National Revolution’. Simultaneous to the mobilisation, Chiang strengthened his hold on the party, being elected chairman of the Central Executive Committee on 6 July 1926, putting him in full control of the party’s military and political organs. On 27 July 1926 the 85,000 troops led by 6000 officers trained at Huangpu began their march north. Looking on from the sidelines, New York Times correspondent Hallett Abend judged the undertaking to be ‘hopeless folly’2.

Impact of the Expedition on the CCP

As the Expedition advanced, Chiang increasingly felt that the CCP posed too large a threat and needed to be weakened – he had always promised to “check their influence as soon as they became too powerful”. On 12 April 1927, 2000 members of the local Green Gang and Nationalist troops unleashed a vicious attack on Communists and unionist troops in Shanghai, killing 5-10,000. The violent persecution of Communists and their sympathisers spread across China, with 250,000 killed in the province of Hunan alone. As a result, Chiang was expelled from the KMT on17 April for this ‘massacre of the people’ – however, many from the KMT’s right wing remained loyal to Chiang, allowing him to form his own separate government in Nanjing on 18 April 1927. A parallel government was formed by the KMT’s left wing in Wuhan – the two provinces that it controlled saw a growth in trade unions, and more than 2 million peasants and small farmers joined 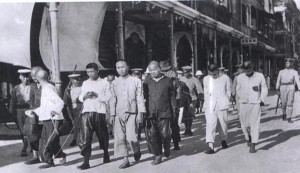 Communists being rounded up in one of the purges

On 10 October 1928 Chiang and his troops entered Beijing, marking the victory of the Northern Expedition. The reasons for this success were varied. The Expedition had had a strong propaganda focus – in the beginning, Communist members of the troops worked with peasants in the provinces Chiang’s army conquered, addressing their concerns about land reform. The Nationalist army did not loot or pillage unlike other warlord armies, and was accompanied by a Blood Flower Troupe to perform revolutionary plays. Thus the expedition drew popular support, the Nationalists being guided by peasants along hidden paths to attack. However, this was also supplemented by bribery and alliances with local warlords. The so-called ‘Christian General’ warlord Feng Yuxiang was bribed with $2 million a month in return for providing military support to Chiang, and an alliance was formed with a trio of generals from the Guanxi warlord clique, while warlord troops were often persuaded to surrender by bribery. Despite winning Beijing, by the end of the Expedition the KMT controlled only 5 provinces, and had destroyed only one warlord faction (the Zhili clique).

The legacy of the Northern Expedition remains contentious. Some historians argue that it laid the basis for the problems which would eventually be the downfall of the KMT government, while others view it as a military victory that helped bring some stability to China.

“The tug-of-war between the centre and the provincial barons was too deeply embedded to be undone by a single military campaign, however successful” – Jonathan Fenby

“The atrocities perpetrated have long been remembered, and form that ‘blood debt’ which the Communists claimed in their hour of victory twenty-two years later.” CP Fitzgerald

“The combination of the NRA and the promise of modernization and land reform gave the Northern Expedition an appeal of a kind that proved irresistible.” – Diana Lary

“The Northern March coincided with the rise of a vast mass movement in the provinces of Kiangsi, Hunan and Hupeh, drawing fresh millions into the struggle and before long engulfing Wuhan and Shanghai.” Leon Trotsky

“The victories that made the warlords retreat were won by arms and bribery, not evangelism of the masses” – Jonathan Fenby