Founding of the Second United Front

Despite the Long March being officially declared over with the founding of the Yan’an Soviet, conflict continued between the CCP and KMT. On 12 December 1936, Chiang Kai-Shek was kidnapped from his accommodation in the town of Xian by Zhang Zeuliang, a young warlord allied with the CCP. The kidnapping was an attempt by Zhang to force the KMT and CCP to negotiate and unite against Japan – the Communist li 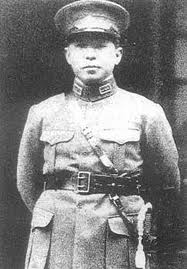 leadership in Moscow, however, was outraged, as Stalin believed that the incident “could only damage the anti-Japanese united front”. Held in captivity, Chiang agreed to a deal with the CCP on 25 December 1936. Nationalist troops would be removed from China’s north-west, where Yan’an was, the Nanjing government would be reshuffled to give more weight to the anti-Japanese faction, the Nationalists’ campaign against the Red Army would end and the CCP would become a recognized political party. This marked the beginning of an uneasy alliance between the CCP and KMT. A Second United Front was officially declared on 22 September 1937, in order to provide a unified resistance to the Japanese offensive on China, which had begun on 7 July 1937. Under the terms of the Front, Yan’an was declared a self-governing, autonomous region within the Republic of China, and the Red Army came under the ultimate command of Chiang Kai-Shek.

Japan had been slowly encroaching on Chinese territory since 1931, using its modernised military to take over progressively larger swathes of north-eastern China. All-out war, however, only broke out after Japanese 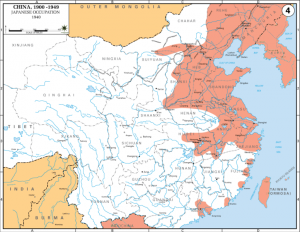 Extent of Japanese occupation by 1940

troops stationed at Marco Polo Bridge near Beijing engaged in a minor skirmished with Chinese troops. Claiming that the Chinese attacked first, Japan demanded an apology and the withdrawal of Chinese troops from the area – China refused, instead reinforcing Beijing with increased troops, and in response Japan attacked. The offensive into the mainland was launched on 7 July 1937, and by 28 July the Japanese had taken Beijing. Their advance into mainland China continued largely unabated – on 20 November, the KMT had to flee Nanjing, unable to resist the oncoming Japanese troops, and establish a new seat of government in Chongqing. Nanjing was taken on 13 December and subjected to a campaign of looting, pillage and rape, with as much as 300,000 civilians murdered by Japanese troops in the city.

Effect of the war on China’s population

By the end of the war in 1945, 15-20 million Chinese had been killed and 95 million displaced. The Japanese assault did not spare civilian lives, often employing indiscriminate bombing of major cities – in one two-day period, 2,526 bombs fell on Shanghai. Chiang himself was prepared to sacrifice civilian lives in order to gain a military advantage. In June 1938, he ordered the dykes on the Yellow River to be blown, unleashing a flood 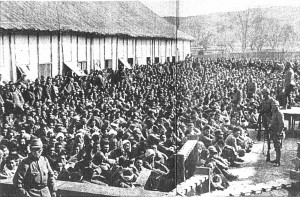 that killed 500,000 people and affected a total of 6 million. Nationalist armies could be exploitative of local populations – the army of General Tang Enbo took 30-50% of farm output from villages in Henan to feed his troops, contributing to the famine which was already ravaging the province. In one county, two-thirds of the population of 150,000 had nothing to eat – Chiang, however, remained oblivious of the situation, and only intervened after an American journalist made him aware of it1.

The KMT during the war

The ease with which Japan was able to advance into mainland China was partially due to the weakness of the opposition offered by the Nationalist army. The KMT lacked a heavy-manufacturing base on which to build a modern military, and Chiang remained focused on stockpiling resources to fight against the CCP in the future rather than using them to address the Japanese invasion. Despite being large in number, with 2 million troops, the Nationalist army lacked the cohesion and training to carry out a major war effort. According to historian Michael Gibson, only 79 of the 165 army divisions actually reported to Nanjing, while the rest were under the command of regional leaders, and only 17 were of good quality2. Regional warlords were often more interested in asserting their own power rather than contributing to the national war effort. Half of the officers promoted from the ranks were thought to be illiterate. Chiang’s leadership, meanwhile, has also been critiqued. He refused to allow any retreat as a matter of principle, meaning that good troops often fell into protracted but unwinnable battles. According to the US-sent General Stilwell, “Chiang himself is the main obstacle in China’s unification and it’s co-operation in a real fight against Japan”, while “the Chinese soldier is excellent material, wasted and betrayed by stupid leadership”.

On 11 December 1941, the US joined the war against the Japanese, sending aid and advisers to Chiang. Despite this support, then-president of the US Franklin Roosevelt pursued a ‘Europe First’ policy, focusing on fighting Nazi troops, and therefore was set against reinforcing Chiang’s army with US ground troops. Under the conditions of the aid agreement, General Joseph Stilwell would be sent to China to become the Chief of Staff in the army and set about reforming and strengthening it – however, generals would continue to report to Chiang. This met some resistance from Chiang, who saw this as undermining his own authority and China’s sovereignty. Tensions again flared when US Army Chief of Staff George Marshall refused to allow Nationalist representatives to join meetings of Anglo-American chiefs of staff – Chiang complained the China was being treated as an inferior by not being included in Allied military planning. On 19 October 1942 General Stilwell resigned, stating that he was unable to work with Chiang and that “the Nationalist system much be torn to bits”. He was replaced by Albert Wendermeyer, who worked on plans for an offensive in the south and authorized a fire-bomb raid of Wuhan on 18 December 1944 that destroyed Japanese air force facilities there. 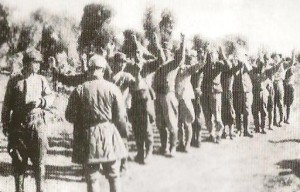 The Sino-Japanese War ended in August 1945, when the United States dropped two atom bombs on Hiroshima and Nagasaki, causing widespread destruction and forcing Japan to sign an unconditional surrender on 14 August 1945.

“Chiang did not want to surrender to Japan, but nor did he want to declare war. He thought that China had no realistic chance of winning, and that taking on Tokyo would lead to his country’s destruction. He opted for a very unusual limbo…He was able to hang onto this state thanks to China’s size, and the fact that the Japanese were only encroaching gradually.” Chang and Halliday

“Once Chiang had moved his government to Chongqing he adopted a relatively passive approach to fighting the invaders…The Japanese had also eased the military pressure on the KMT forces, and directed their main thrust at Communist-held areas behind Japanese lines.” Morecombe and Fielding

“The KMT’s inaction against the Japanese and their continued assaults against the Communists shocked many of their foreign advisors.” Morecombe and Fielding

“[Chiang’s] government was notorious for it’s inaction.” Wood and McManus

“By 1941 both the CCP and the GMD had an undeclared truce with the invaders and spent most of their time attacking each other verbally and physically.” Wood and McManus