The Yan’an period (CCP during the Second Sino-Japanese War)

Reforms in the Liberated Areas

Following the end of the Long March, the CCP established a Soviet in Yan’an, and continued to expand its influence throughout the 1940s – the areas where it exercised control were termed Liberated Areas. Here the CCP enforced their program of social reform – a University of Anti-Japanese Resistance was founded in 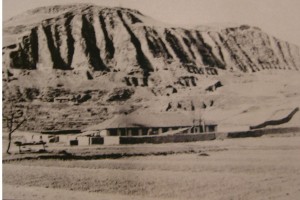 The Red Army acted as a progressive force that was tightly bound with the local populations – its creed was “Our Red Army has three great tasks: to destroy imperialism and the feudal forces, to carry out the agrarian revolution, to establish the people’s sovereignty”. Soldiers helped peasants plough, dig and harvest, and embodied the concept of the Yan’an way – the ideology of living by the virtues of struggle, sacrifice, selflessness, diligence and courage, which would grant the population strength and solidarity.

After landlords had been removed from domination in the villages, existing local governments were largely maintained in Yan’an. The CCP espoused the idea of popular representation while also assuring its own influence with the system of Three Thirds, in which local government consisted of 1/3rd Communist Party figures, 1/3rd sympathetic left-wing and Marxist groups and 1/3rd elected officials. 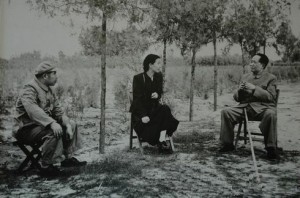 Mao and his wife Jiang Qing in the Yan’an countryside

From 1935 to 1937 surplus land was taken from landlords and redistributed to the peasantry – this was carried out by associations of poor peasants backed by Red Army soldiers. However, Mao was careful not to unduly antagonise the richer peasants, believing they could be part of the communist support base. As such, they were generally left with enough land to support their families, thus ensuring they supported the fight against the Japanese. Interest on loans was reduced from 18% to 1.5%, while rent was to be no more than 25% of the total harvest.

However, the Liberated Areas also engaged in the opium trade to supplement income, with drug profits contributing up to 40% of total revenue of the base administration1.

The development of Mao’s ideology

It was during the Yan’an period that Mao would clarify his revolutionary ideals and produce a series of writings on politics on the arts that would later be revered by the CCP. His 1940 work ‘On New Democracy’ put forward a policy that embraced all classes in the struggle against Japan, casting the CCP as a nationalist 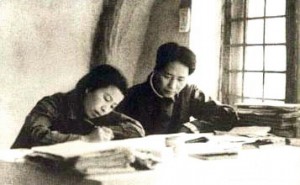 Mao and his wife Jiang Qing in Yan’an

party that would put national interest and unity above everything. Mao also developed the concept of the ‘mass line’, which he characterised as ‘leadership from the people to the people’. This meant both that the party would be made up of the population it was representing and that party cadres were to ‘go to the people’, living with them and thus assessing their needs and desires – this ensured that the decisions being made by the party centre would be informed by the grassroots. Mao summed up the concept as such ‘It [the Party] should teach every comrade to love the people and listen attentively to the voice of the masses; to identify himself with the masses wherever he goes and, instead of standing above them, to immerse himself among them; and, according to their present level, to awaken them or raise their political consciousness’. This marked the clarification of what was to become known as Marxist-Leninist-Mao Zedong Thought. It contrasted with the Marxist-Leninist belief that by itself, the proletariat could only attain ‘trade-union level consciousness’ (meaning they would agitate for reform within the existing system, but not seek to overthrow it), and it is the job of the Party to imbue the people with revolutionary sentiment. Mao’s approach not only focused on the peasantry as the primary revolutionary class, but argued that the revolution should stem from the needs and desires of this class. He also introduced the concept of ‘permanent revolution’, meaning that Communists must never be allowed to become complacent in stable positions of government, for if they do they will be corrupt. If this happens, they must be purged and a new generation roused to revolt. Mao was able to develop and implement these new ideas due to the independence granted to him by the dissolution of the Comintern by Stalin in 1943.

CCP in the anti-Japanese resistance

During the Second Sino-Japanese war, the CCP tried to define itself as a nationalistic organisation that would resist the Japanese and protect the interests of the Chinese people. Their most fabled military campaign was the Hundred Regiments Offensive, launched on 20 August 1940 with 400,000 troops. They succeeded in blowing up bridges and tunnels and ripping up track, and went on for the rest of September to attack Japanese garrisons frontally. About 970 km of railways were destroyed, and the Jingxing coal mine—which was important to the Japanese war industry—was rendered inoperative for six months. Mao also claimed that in 1943 alone, the Red Army had been involved in 11,000 offenses against the Japanese. However, there is some dispute regarding the extent of the Red Army’s involvement in the war. In 1942, the Comintern representative Vladimirov observed that ‘the Communists had long been abstaining from both active and passive action against the aggressors’2. Nevertheless, the CCP did suffer significant losses in the war, especially in the ‘Three Alls’ campaign launched by the Japanese in December 1941 as retaliation for the Hundred Regiments Offensive. The ‘three alls’ referred to the Japanese command to ‘kill all, burn all, destroy all’ and their implementation resulted in the population of the Liberated Areas falling from 40 million to 25 million by the time the campaign ended in the autumn of 1942.Following this campaign, the CCP changed its policy to be “70% expansion, 20% dealing with the Kuomintang, 10% fighting the Japanese.” 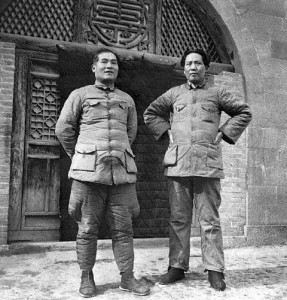 Although Mao’s leadership had been reinforced at the Zunyi Conference, he still faced rivals within the party. These included the so-called ’28 Bolsheviks’, led by Wang Ming – students who had studied in Moscow and been sent to China in 1937 to strengthen Soviet control over the CCP. Wang and his Bolshevik supporters advocated an urban-focused Soviet model of proletarian revolution, which contrasted with the peasant-focused Mao Zedong Thought. Mao was anxious to win over this faction, and supress threats to his leadership, by enforcing the primacy of Mao Zedong Thought. Out of this desire grew a cadre education movement, which eventually morphed into a ‘cadre screening movement’. This movement began in the autumn of 1942 under Mao’s political police chief Kang Sheng and aimed to attack subjectivism (book knowledge of Marxism-Leninism and neglect of its practical application), sectarianism (not respecting the authority of the Central Committee) and party formalism (speaking in formal terms that ordinary people would not understand). By July 1943 1,000 ‘enemy agents’ were reported to have been arrested, while in all, 40,000 Party members were expelled.

“[Mao’s] great work has been to change Marxism from a European to an Asiatic form…on every kind of problem…in ways of which neither Marx nor Lenin could dream…All Asia will learn from him more than they will learn from the USSR…[His works] highly likely influenced the later forms of government in parts of post-war Europe.” Anna Louise Strong

“[Class enemies] could be almost anybody, as [the Party] extended the criteria for condemning people far beyond the original ‘landlords’ and ‘kulaks’, in order to create victims when there were no landed rich…[They] invented a new -and very vague – yardstick: ‘how they are liked by the masses’. This meant that anyone could be turned into a target, so those who had incurred feelings of indignation or jealousy on the part of their fellow villagers, for behavior like having ‘illicit affairs’, became prime victims. Appalling physical abuse swept the Red Areas.” Chang and Halliday

“The increasing use of terror against any form of opposition, and the extermination of large sections of the population…create in the peasant a terror and furtiveness he has never before seen in Communist areas.” Jack Belden, Western Liberal journalist

“Mao had learnt…that the most effective way of conquering the people was to conquer their hearts and minds.” Jung Chang

“The CCP had to be purged of any groups that might challenge Mao, whose personality cult was being developed by leaps and bounds” Fenby

“[The CCP] was doing much less fighting than they claimed, and certainly less than the Nationalists” Fenby