Following the fall of Yuan Shikai on March 22 1916, Li Yuanhong, the vice-president, assumed power. However, his regime could not match the military power of generals in the north – soon, it was overthrown by another warlord. Between 1916 and 1928, China changed head of state 9 times and had 26 prime ministers, as varying military forces vied for power. The lack of stability at the centre meant that regional powers grew stronger, withholding tax revenue on a massive scale – in 1926, only a quarter of the salt levy reached Beijing1. Warlord armies continued to rise in number, constituting 1.5 million men by the middle of the 1920. This continued military tug-of-war and rule by force had varying effects on the Chinese population.

As regional leaders remained concerned with consolidating their power rather than providing for their citizens, the Chinese economy did not see much development in the 1920s. Construction of railways amounted to a third of what had been built under the Qing empire, and by the mid-1920s China had 5,200 miles of railways – less than Britain in 1850. Peasant life remained difficult, with rural unemployment estimated to be at 87 million. Warlords often imposed large taxes on the populations of the regions they controlled, in an attempt to find the revenue required for the upkeep of their armies. By the 1920-s, there were 673 different land taxes in China, some being collected 40 years in advance2.. A third of farmers were believed to be in debt, some paying interest as high as 200%.

The instability of the warlord era also led to a growth in the number of people questioning traditional Confucian ideals, in an attempt to find a new political and societal system that could bring stability and prosperity to China. This questioning was exemplified by the May 4th Movement, which traced China’s

Duan Qirui, the warlord who promised Shandong to the Japanese

problems to Confucian traditions and stressed the importance of the individual in society. The Movement was born in response to German concessions in Shandong being given to Japan rather than China in the 1919 Treaty of Versailles which ended the First World War. China had expected a favourable outcome from the Treaty, as it had sent 100,000 workers to help Britain and France on the Western front, losing 2000 Chinese to the war. However, the warlord government of Duan Qirui, which had controlled Beijing in 1918, had made a secret deal with Japan, promising it Shandong in return for loans. When it was revealed that China had lost the mining-rich Shandong, students from Beijing’s universities gathered at Tiananmen Square to protest this humiliation. Workers went on strike and Japanese goods were boycotted – students, workers and intellectuals were united by their shared indignation, marking the start of a unified nationalist movement. Within a month, protests had spread to 20 provinces and 100 towns and cities. The government responded with arrests and declared martial law, but despite this repression May 4th gave rise to a youth movement that embraced 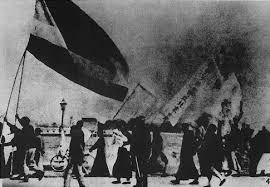 Students marching during the May 4th Movement

These ideologies played an important part in the establishment of the Chinese Communist Party.

“The ‘regional militarism’ which developed was a self-protective, conservative phenomenon. It protected the region by detaching it from the turbulent state. It protected not the inhabitants of the region but its military rulers” Diana Lary

“For its victims, warlordism was a profound tragedy, an endless menace and degradation… It undermined China’s economy, threw her fiscal system into disarray, and retarded efforts at economic advancement, except in areas under foreign control” Diana Lary

“On the one hand, the warlord years represented the low point of political unity and national strength in the twentieth century. On the other hand, they also represented the peak of intellectual and literary achievement, and out of that tumultuous and bloody era, partly in response to the warlords, flowed the intellectual and social movements that culminated in the reunification and rejuvenation” James Sheridan