These formed the bedrock of Sun Yat-Sen’s philosophy and were touted as holding the answer to modernising China and improving the lives of its people. They were the official ideology of the Kuomintang.

Refers to the freedom from the imperialist domination many Chinese felt they were suffering from. Sun argued that “our lack of unity is caused by our lack of national consciousness” and encouraged the Chinese to put aside their ethnic differences in order to achieve national unity – “The times are critical, for there is a danger of racial destruction. Unite the four hundred millions and save the nation through nationalism!”

Refers to Western constitutional government, with Sun declaring that “Inasmuch as democracy is the political tendency of the day, China should also advance toward it”. The transition was to take place through three periods during which democracy would be gradually introduced.

– First, the period of military unification of the country, during which the army would rule.

– Then, the period of party tutelage, during which the KMT party would educate the people on matters about democracy, and would appoint trained men to help in local self-rule.

– Lastly, the period of constitutional democracy, when the government would have the five power branches and four people’s rights mentioned above functioning efficiently.

– Before the 1920s, Sun Yat-sen specifically laid down that the first stage would last for 3 years and the second 6 years. In 1924, however, he no longer set specific lengths for each.

This principle promised that through state-planning, the development of industry would progress smoothly 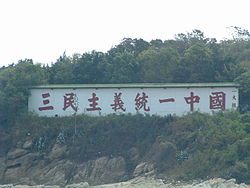 and bring benefits to all the people. The government would regulate and control the flow of money in the country, while land rights would be equalized. All these social measures were to be carried out peacefully and gradually through government laws rather than through violent class struggle as Communism advocated.

The Three People’s Principles lost their prominence in mainland China following the defeat of the KMT by the CCP, but have continued to be embraced as the ideology of Taiwan, where KMT leader Chiang Kai-Shek fled following Communist victory in 1949.