Chiang was an influential member of the Kuomintang (KMT), the Chinese Nationalist Party, and was a close ally of Sun Yat-sen. He became the Commandant of the Kuomintang’s Whampoa Military Academy and took Sun’s place as leader of the KMT when Sun died in 1925. In 1926, Chiang led the Northern Expedition to unify the country, becoming China’s nominal leader. 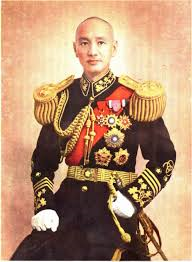 China (ROC) from 1928 to 1948. Unlike Sun Yat-sen, Chiang Kai-shek was socially conservative, promoting traditional Chinese culture in the New Life Movement and rejecting western democracy and the nationalist democratic socialism that Sun embraced in favour of an authoritarian government (labelled Confucian Fascism).

A major split between the Nationalists and Communists occurred in 1927; and, under Chiang’s leadership, the Nationalists fought a nationwide civil war against the Communists. After Japan invaded China in 1937, Chiang agreed to a Second United Front with the CCP. Despite some early cooperative military successes against Japan, by the time that the Japanese surrendered in 1945 neither the CCP nor the KMT trusted each other nor were actively cooperating.

After American-sponsored attempts to negotiate a coalition government failed in 1946, the Chinese Civil War resumed. The CCP defeated the Nationalists in 1949. Chiang’s government and army retreated to Taiwan. After evacuating to Taiwan, Chiang’s government continued to declare its intention to retake mainland China. Chiang ruled the island securely as President of the Republic of China and General of the Kuomintang until his death in 1975.