Mao was born in Shaoqi, Hunan province, into a middle-peasant family. He worked as a librarian and teacher before joining the CCP in 1921, serving as in both Shanghai and Hunan to advance the Communist cause. He set up his own peasant soviet at Jiangxi in 1929 but was forced to abandon it five years later due to attacks by 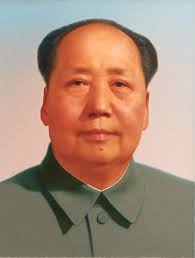 Chiang Kai Shek’s forces, gaining political primacy during the Long March that was to follow.

Founding a soviet in Yan’an, Mao clarified his peasant- based ideology of Mao Zedong Thought while also strengthening his grip on the CCP, becoming its undisputed leader by the mid-1940s. In the Civil War against Chiang Kai Shek, it was Mao who played a decisive role in the CCP’s success, exerting tight control over his troops and changing to an offensive strategy at a crucial point in the war.

The CCP’s victory in 1949 put Mao at the head of the People’s Republic of China, which he began to transform according to Mao Zedong Thought. Often pursuing a more radical stance than his comrades, Mao was the architect of the disastrous Great Leap Forward initiative, which led to the economic and social decimation of a large proportion of China. Sidelined from decision-making during the moderate period following the Leap,

Mao would eventually unleash the Cultural Revolution partially in order to regain his primacy within the Party. He remained suspicious of those around him, often deposing long-serving CCP comrades. Mao passed away in 1976, the leadership eventually passing onto Deng Xiaoping.