Sun Yat-sen was a doctor and revolutionary who played a prominent role in revolutionary groups such as the Tongmenhui, later founding the Kuomintang. He developed the concept of the Three People’s Principles which proposed that democracy, nationalism and improved people’s livelihood were needed to strengthen 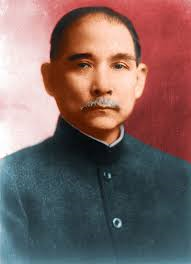 China, and lectured about these concepts at universities around China.

Although the Tonghmenhui had previously attempted to overthrow the Qing, Sun was not one of the direct instigators of the 1911 revolution. However, he eventually became its figurehead, being elected Provisional President of the Republic of China. Lacking authority, Sun handed this role over to Yuan Shikai – under Shikai’s republic, however, Sun’s party was persecuted.

Following the collapse of the Republic into warlordism, Sun and his followers retreated into the south, with Sun founding several successive governments there and eventually establishing the First United Front with the CCP in 1923. Sun did not live to see his party consolidate power during the Northern Expedition, dying on 12 March 1925.