The Kuomintang was a revolutionary group that formed as a result of the Tongmenhui (led by Sun Yat-sen) and other groups combining to form one political party. The Tongmenhui had existed since September 1905, reaching 10,000 members in 1906 and participating in 75% of anti-Qing uprisings between 1908 and 1911. 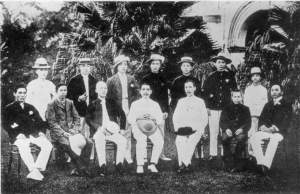 The Singapore branch of the Tongmenhui with Sun Yat-sen (front row, centre)

The Kuomintang took on the revolutionary principles of the Tongmenhui – Sun’s Three People’s Principles and soon became the main party to oppose Yuan Shikai’s Republican party in the 1913 elections. The KMT won 45% of all seats, while Yuan’s party got 20%. The man who was set to become Prime Minister, the KMT’s Song Jiaoren, argued for a parliamentary regime over one based on presidential authority, which conflicted with Yuan’s desire for power. On March 20, 1913, Song was killed by a hired assassin, who some have alleged was hired by Yuan. Yuan’s repression of the KMT further stepped up when, on November 4, 1913, the KMT was outlawed as a political party and its members forcibly escorted out of parliament.

After this defeat, the KMT again settled into revolutionary activity, founding several governments in China’s 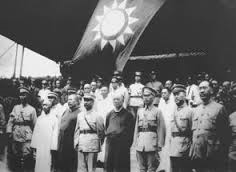 south. In 1923 it combined with the CCP to form the First United Front, and it 1924 the Huangpu academy was opened to train KMT and CCP troops. After Sun’s death in 1925 the party came under the leadership of Chiang Kai-Shek, who in 1926 mounted the Northern Expedition, during which the First United Front came to an end, with Chiang attacking CCP members and supporters in the Shanghai Massacre.

At the conclusion of the Expedition, the KMT became the ruling party in China. Its main goals were to eradicate the CCP and strengthen China – both of these proved difficult to achieve. Throughout the 1930’s the KMT pursued an aggressive military campaign against the CCP, eventually forcing them out of their soviet at Jiangxi to undertake the Long March. 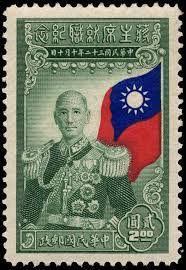 Following the end of the Long March and the Xian incident, a Second United Front was officially declared on 22 September 1937, in order to provide a unified resistance to the Japanese offensive on China, which had begun on 7 July 1937. The KMT suffered heavy losses in the war, however coming out victorious due to the American bombing of Japan. Its military engagement continued however, as the Second United Front had broken down due to a KMT attack on CCP troops and the two were now engaged in conflict. The CCP came out victorious in October 1949, with Chiang and other members of the KMT fleeing to Taiwan. Chiang’s KMT government in Taiwan continued to hold the UN seat for China until 1972.