Declaration of the Rights of Man and Citizen

The Declaration of the Rights of Man and Citizen was a touchstone document, created on 26 August 1789, with drafts being written by Sieyès in July 1789. It addressed many of the public grievances raised in the cahiers des doléances.

The Declaration recognised the key principles of personal 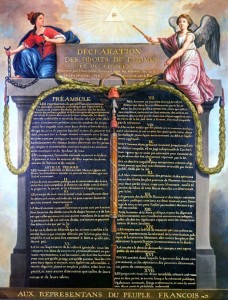 Declaration of the Rights of Man and Citizen

liberty, general will, religious freedom, representative taxation, meritocracy and the separation of powers between the executive, legislature and judiciary. The ideals enshrined in the document were fundamentally drawn from the Enlightenment works of many philosophes like Rousseau, Voltaire and Montesquieu. There were also some influences from the American War of Independence, with ideas such as equality and inalienable rights engrained as a result.

However, there were also some limitations of the document. Firstly, there was an obvious omission of women, the poor and slaves in French colonies from the Declaration, seen in the document title itself being the rights of man and citizen. Secondly, it was considered to be a document catering first and foremost to the bourgeois, with Article 17 recognising that property was to be inviolable. As such, this has prompted many historians to label the Declaration a “statement of bourgeois idealism”.

Nevertheless, it was a highly influential liberal-democratic document, and necessary for a society that had newly broken free from an absolute monarchy.