The main three concepts that we need to understand from methods 1 & 2 are independent, mutually exclusive and conditional.

). We can then draw a tree diagram for Sally to walk/not walk her dog Mack given that the weather is pleasant/unpleasant. 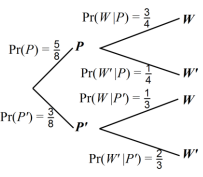 The final step is to add those two products together to find the final probability of Sally walking Mack on a particular morning in April.