Basically this means that we can just sum the functions together to get the addition function.

In order to define the multiplication function, follow the rule that:

Basically this means that we can just multiply the functions together to get the multiplication of the functions.

This is the same as the domain of the addition function in that the new function will only have a value at values of x where both the functions of f and g were defined.

In order to sketch the addition function the best way is to sketch the two individual functions out by hand and then add them together in order to get a function that works. Then we can also see over which domain the new function will actually appear clearly as well.

Question 5 exam 2 in 2013 we have the multiple choice question of finding the domain for f plus g given the functions:

The domains of the two functions only overlap for:

This was one A of the multiple choice questions and our final answer.

However let’s pretend that the question also asked to sketch the addition graph. Now we would have to sketch out both the functions and then add them together which is good practice.

To sketch f of x, we need to remember our log sketching rules.

We can see that the function:

This shift to the right also gives us a y intercept. To find the y intercept let x=0.

This means that the function goes through the origin and since it is a one to one function these are the only intercepts.

It is also important to calculate the point where x=-1, the other endpoint of our f+g domain.

The rules to help us sketch this function are:

Knowing the shape of our square root graph it will therefore keep increasing at a decreasing rate.

These two functions need to be sketched on the same graph: 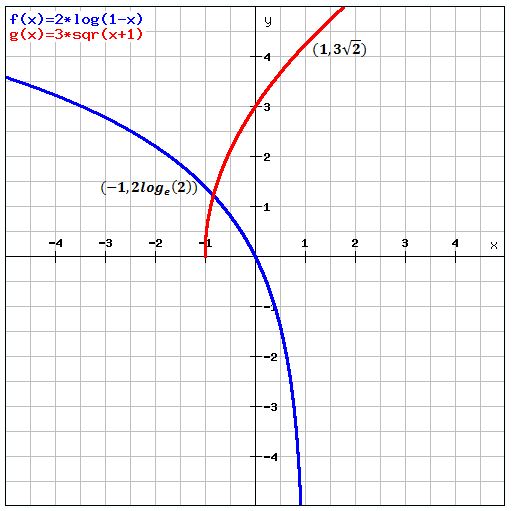 Now our addition function is easy to draw as we just need to map out the points where one of the functions equal zero, as f+g will just be equal to the other function there.

There for we get for f+g: 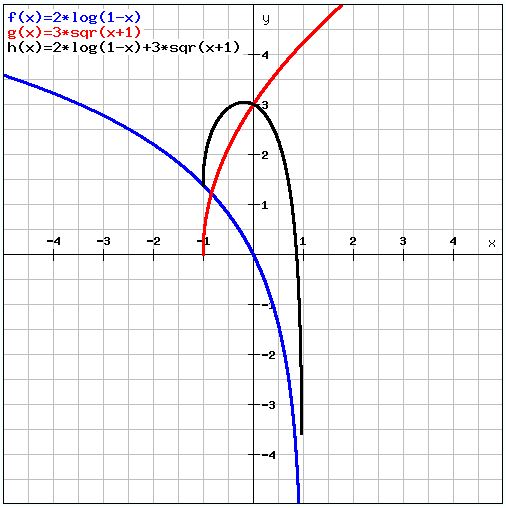 The trick to drawing in the addition function is to follow the curves of the two functions as best you can. The turning point of the function can be calculated through either differentiation or a function on the calculator.