There are a number of rules that we can apply to any basic exponential function such as this.

Number four is that the x axis is a horizontal asymptote.

Number five is that the domain includes all real numbers.

Number seven is that it is only a one to function, which means that every point on the x axis corresponds to one and only one point on the y axis

To graph this we can just follow the same rules as the exponential functions.

So the rules above will face a shift along this axis 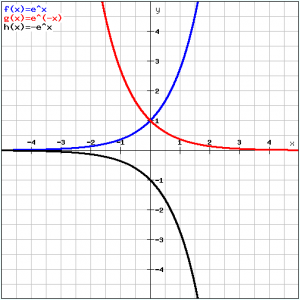 It is also possible for a function to be reflected in both the x and y axis.

If the function has a dilation factor in front of it, say k. Then the image is multiplied by this factor.

If the function has a dilation factor of x divided by k. Then the image is dilated by a factor k from the y axis.

Lets now have a look at an example, such as the function:

This we can rewrite quickly as:

Straight away we can see that there is a reflection in the y-axis, no dilation, but a shift of the graph of one to the right and three up.

The asymptote will move up to x=3 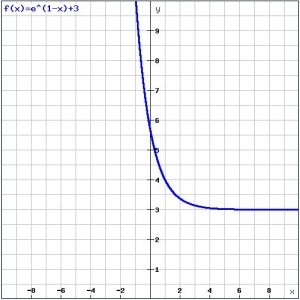