The angle, theta, is measured from the positive x-axis line in a reverse clockwise direction and the measurement unit is radians. Each quadrant is divided up into 90 degree quarters which are the equivalent of

radians. From this graph the sin function will be positive for the first two quadrants, which is the equivalent of

For cos it will be positive in the first and fourth quadrant, as that is where the x-axis is positive. This will be in the range of

. Theta can also take on a negative value, which is just when it moves in an anti-clockwise direction. There for we know for cos it will be positive in the range of

The period of the function is how long the graph takes to perform a full circular rotation and in the basic function that is 2π.

Once the original pattern of a sine and cos function, the starting point, the period and the amplitude is known then they are able to be sketched.

Lets take a look at the basic sine and cos functions. 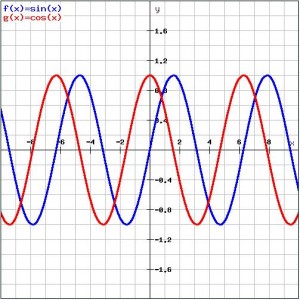 . The same pattern for each function is repeated continuously.

Sin and Cos Equations

Once we have the basic form of the sin and cos functions in our head, it’s time to look at the more complicated sin and cos equations.

In these equations epsilon gives us the shift along the x axis, where it moves in the reverse direction of the epsilon sign. The b component of the equation is the shift either up or down on the y axis.

The a determines the amplitude of the equation, which is as we said before the difference between the max or min and the mean.

We also need to determine the period of the function, which is how often the pattern repeats itself. The formula for the period is:

This is the number in front of cos, 5. Since there is no shift in the y direction then we know also that our min and maximum will be negative 5 and 5

Step 4 Find the x intercepts over the range, let f(x)=0

Step 5 Find the start point of the function

This is a shift of

Step 6 Sketch the function using the starting point and the x and y intercepts, amplitude and period 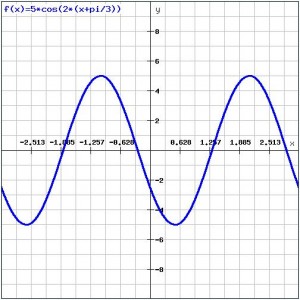 Note that the pattern repeats itself twice which is what we expect from a period of pi.

In the exam it is perfectly acceptable to also label your x-axis as pi fractions and much easier to do when sketching by hand.