Beginnings of the Cultural Revolution

The Great Proletarian Cultural Revolution was a social, political and military movement during which Mao and his supporters attempted to cleanse China from ‘bourgeois’ influence in order to build a new, proletarian culture. It resulted in the persecution of millions of Chinese, and debate still persists about the true motivations of its orchestrators – its effects, meanwhile were far-ranging and often unpredictable.

By the mid-1960’s, Mao felt troubled by many of the developments taking place in China. The moderation of economic policies following the failure of the Great Leap Forward had introduced capitalist elements such as private land ownership into China’s economic system, while Liu Shaoqi’s ‘Revised Later Ten Points’ had made government-appointed work teams the primary drivers of revolutionary change – a role that Mao felt was reserved for China’s peasants. He feared that a more efficient bureaucracy could get in the way of the ‘permanent revolution’, the need for a revolution to constantly renew itself and question its old methods. Additionally, the increasing prominence of Liu Shaoqi’s policies threatened Mao’s supremacy in the Party. To eliminate these perceived problems, Mao decided to make culture his battleground.

In 1963 Mao’s wife Jiang Qing was appointed to the Ministry of Culture as the Chairman’s personal observer.

Her task was to investigate culture and the extent to which socialist values were being properly advocated – she concluded that ‘feudal’ and ‘reactionary’ values were evident in modern Chinese culture. Mao considered it “absurd” that “even party members are enthusiastically promoting feudal and capitalist art but ignoring socialist art”.

The concept of culture as battleground became more pronounced with the persecution of author and vice-mayor of Beijing Wu Han for his 1959 play ‘Hair Rui Dismissed from Office’. In it, Wu Han portrayed the downfall of a Ming-era official who dared to criticise the emperor. Mao initially praised the play, but from 1965 onwards began to see it as an allegory or his own dismissal of Peng Dehuai, with Mao thus cast as the unapproachable and deluded emperor. The play was labelled counter-revolutionary by one of Mao’s supporters, Yao Wenyuan, who declared in a review that ‘If we do no clean it up, it will harm the people’s cause”. In January 1965 a ‘Five Man Group’ chaired by Beijing mayor Peng Zhen was established in order to study the potential for a cultural revolution based on eradicating plays such as Wu Han’s. Meanwhile, under political pressure, Wu Han offered a self-criticism on 30 December 1956. On 12 February 1966 the ‘Five Man Group’ under Peng concluded that the Wu Han problem was a literary, rather than political matter, and dismissing Yao’s claim that the play was counter-revolutionary. Simultaneously, a ‘Forum on Work in Literature and Art for the Armed Forces’ was held in Shanghai by Lin Biao with the participation of Jiang Qing, which on 20 February denied the findings of the February Outline Report and called or a ‘Great Socialist Cultural Revolution’, claiming that China was “under the dictatorship of a sinister anti-Party and anti-Socialist line which is diametrically opposed to Chairman Mao’s thought”. In April 1966 Peng Zhen and the members of the ‘Group of Five’ were denounced for ‘taking the capitalist road’. This was the first signal that Mao’s cultural revolution would not spare even the most established officials in its pursuit of ‘a socialist culture’.

On 16 May 1966 a Politburo meeting released a circular that announced the end of Peng Zhen’s Five Man Group and the formation of a new Cultural Revolution Small Group, made up of Jiang Qing, Chen Boda, Xhang Chunqiao and Kang Shang. Peng Zhen, meanwhile, was denounced. The Circular alleged the presence of enemies of the Communist cause within the Party itself who “wave the red flag to oppose the red flag” and who can only be identified through the “telescope and microscope of Mao Zedong Thought”. May 25 saw the first response to Mao’s call for revolution – a philosopher lecturer at Peking University, Nie Yuanzi, put up a big character poster attacking the university’s administration as being like Peng Zhen and attempting to oppose the party. Mao promptly gave the poster his personal stamp of approval, and the revolutionary movement began to gain traction against students, with classes suspended nation-wide on June 13.

The Party leadership in Beijing was caught off-guard by the chaotic nature of this new popular movement. With Mao’s guidance, Liu Shaoqi and Deng Xiaoping ordered the dispatch of ‘ideological-guidance’ squads of cadres, labelled “work teams”, into the city’s schools to restore party control and order. However, the work teams themselves were made up of cadres, and thus came under suspicion from the student movement who had been ordered to attack even established party figures. A split began to develop in the party leadership regarding the use of work teams – Liu Shaoqi believed they should remain in place in order to curb the more radical aspects of the movement, while Mao embraced these aspects and saw the work teams as being an obstacle to the revolution. On July 24 he ordered that work teams be withdrawn from universities, giving free-reign to the student masses.

My First Big Character Poster and The Sixteen Points 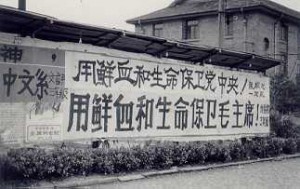 On 1-8 August the Eleventh Plenum of the Central Committee convened to review Mao’s ideological and political programme. During the Plenum, Mao published his own big-character poster, urging revolutionaries to ‘Bombard the Headquarters’, i.e. attack established central party officials, as he claimed that “bourgeois” elite was still thriving in “positions of authority”. During the Plenum, Liu and Deng were increasingly sidelined, as Liu Shaoqi was demoted to number 8 in the Party, while Lin Biao took his role as second to Mao. On 8 August 1966, the Central Committee released the ‘Decision Concerning the Great Proletarian Cultural Revolution”, later known as the 16 Points. This document urged the Chinese people to “to struggle against and crush those people in authority who are taking the capitalist road, to criticize and repudiate the reactionary bourgeois academic “authorities” and the ideology of the bourgeoisie and all other exploiting classes and to transform education, literature and art, and all other parts of the superstructure that do not correspond to the socialist economic base, so as to facilitate the consolidation and development of the socialist system”.

“the young Chinese were repressed, angry and aware of their powerlessness” Spence