The overthrow of the Qing regime in 1911 came about as a result of the actions of several disparate groups who rose up against the government for a diverse range of reasons (see Grievances).

Outraged at the selling of railroad rights to foreigners and the loss of their investments, the population of 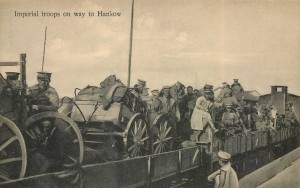 Imperial soldiers on their way to Hankou to put down insurrection

Sichuan rebelled. On August 11-13 10,000 protesters held a rally in the town of Chengtu, and a merchant strike was announced. During further protests on September 7, the police fired on protestors, killing 32 and causing widespread anger – the next day, September 8, thousands of protesters gathered near Chengtu toform the Railway Protection Army, an anti-government force. Previous to this, on September 1, the Sichuan-Hankou Railway Company adopted a shareholder’s resolution calling on the Sichuan public to withhold the payment of grain taxes to the Qing government. By late September, the whole of Sichuan was in revolt, and the Governor-General of the province of Hubei was ordered to send reinforcement troops to Sichuan1.

On October 9 1911 a bomb accidentally went off in the office of the revolutionary group Literary Study Society in the Wuhan three-city complex (province of Hubei). Police arrived and discovered the group’s membership list – 32 were arrested, and 3 executed at dawn on October 10. Later that day, two soldiers shot an officer who questioned them about weapons they were carrying (possibly due to them being revolutionaries that feared mass reprisals). Their battalion, based in another Wuhan city, Wuchang, mutinied, killing officers and occupying the arsenal. The number of rebels was brought to 3600 as other units joined in – the city’s defences, meanwhile, were weakened due to troops being previously sent off to help quell the protests in Sichuan. The 3000 Qing loyalists that remained were defeated and by October 11 the local government was in the hands of rebels. The gentry-dominated local assembly drew up the proclamation of a republican regime in the province, putting the name of brigade commander Li Yuanhong on the declaration. Li was reluctant to take leadership of the rebellion, but was eventually persuaded to do so2. Protests and insurrections spread

throughout China. Peasants play an integral part in these – in November 1911 the city of Canton is taken with the help of more than 100,000 min-chun (people’s army soldiers) who join the rebel forces.

The revolutionary group Kuomintang founded by Sun Yat-Sen in September 1905 and originally called Tongmenhui, was important in articulating and spreading revolutionary sentiment but only joined the revolution following the rebellions in Sichuan and Wuhan. The group staged 5 failed uprisings in 1906-08 and had a 75% share in major anti-Qing uprisings between 1908 and 11. The KMT’s message was that the overthrow of the Qing was the key to modernising China. Sun Yat-Sen saw the future of China as needing to be built on three core People’s Principles – democracy, nationalism and people’s livelihood, which appealed to many 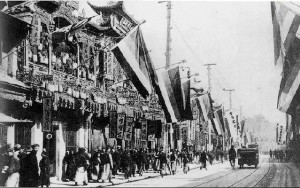 young radicals. Although the 1911 revolution may have been inspired by the KMT, it was not planned by the group – Sun Yat-Sen was in America at the time, and only found out about the revolution on October 12 through a local newspaper. Once he returned, however, Sun took leadership of the revolutionary forces, being elected provisional president of the republic on December 29 at a rebel leader conference in Nanjing.

On October 30 1911 Prince Chun, the regent, yielded to revolutionary demands in the face of widespread

insurrection. He decreed cabinet reform, amnestied political prisoners, authorised the National Assembly to draft a constitution and recognized the revolutionaries as a legal political group. Despite the reforms, Qing power continued to crumble as provincial armies took control. In late November 1911 Yuan Shikai, the previous foreign minister and commander of China’s largest army, the Beiyang Army, entered Beijing. He is treated as a confidant by the Qing regime, and is given full power to negotiate with the rebels. However, unbeknownst to the Qing, Yuan has been offered presidency by the rebels if he supports their cause – on 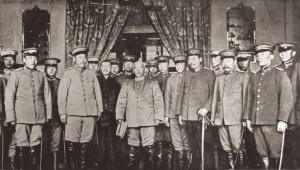 The abdication of the Empreror at the urging of military officials

January 16 he presents a petition calling for the abdication of Pu Yi, the Emperor. On 12 February 1912, Pu Yi abdicates and the reign of the Qing ends.

“This new was of popular discontent, of primitive peasant riots, undoubtedly contributed as much to the fall of the dynasty as did the determined underground work of the militant republicans” Jean Chesneaux

“… the decision to replace the dynasty, and the monarchy, with a republic was, at that time, a most radical step. That the Chinese, of all people, should choose a republic rather than a new dynasty seemed to be wildly idealistic, unpractical, and reckless.” C P Fitzgerald

We pay tribute to him for the intense struggle he waged in the preparatory period of our democratic revolution against the Chinese reformists, taking the clear-cut stand of a Chinese revolutionary democrat. In this struggle he was the standard-bearer of China’s revolutionary democrats. We pay tribute to him for the signal [sic] contribution he made in the period of the Revolution of 1911 when he led the people in overthrowing the monarchy and founding the republic.” Mao Tse-Tung

“Sun himself acknowledged that ‘this time I did not expend an ounce of strength’. …The revolutionaries were united only by their rejection of the dynasty…The dynastic cycle of rise and fall had been played out as often over the centuries. The difference this time was that there was no new claimant to the throne.” Jonathan Fenby