Empress Cixi had a large influence over Chinese politics from 1875 until her death in 1908. Selected as an 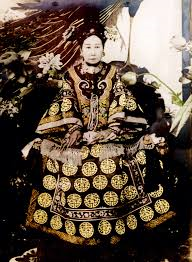 imperial concubine of the Xianfeng Emperor in her adolescence, she gave birth to a son in 1856. With Xianfeng’s death in 1861 the young boy became the Tongzhi Emperor, and she became Empress Dowager. Cixi ousted a group of regents appointed by the late emperor and assumed regency, which she shared with the Empress Dowager Ci’an.

Cixi then consolidated control over the dynasty when, at the death of the Tongzhi Emperor, contrary to the dynastic rules of succession, she installed her nephew as the Guangxu Emperor in 1875. Although she initially lent her support to her nephew’s attempts to modernise China (the 100 Days of Reform), Cixi came to distrust them and eventually placed Guanxu under arrest, putting an end to the reforms.

After the Boxer Rebellion which she had given her support to failed, Cixi’s government embarked on a program of reform (1901 Reforms) that aimed to strengthen China. While somewhat successful, these reforms failed to address the grievances of several sectors of Chinese society who in 1911 combined to carry out a revolution and overthrow the monarchy. Cixi did not live to see the dynasty fall, dying in 1908.